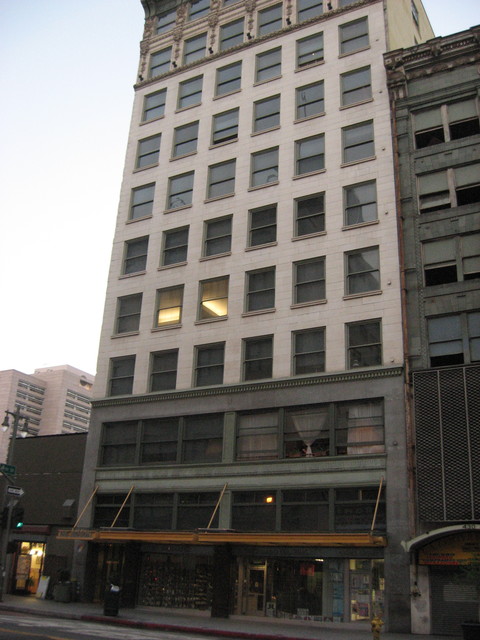 Located on the 1st floor of the 10-story Broadway Central Building of 1907 (now known as the Judson Building). The ground floor space was formerly a shoe store. It was taken over in 1925 by Metropolitan Theatres and was converted into the New Broadway Theatre to the plans of architect L. McConville. It was the first theatre in what became the Metropolitan Theatres chain. In 1926 it was renamed Broadway Theatre. It was equipped with a Wurlitzer organ (Model D, Opus 701).

By 1939 it sported an attractive multi-colored neon marquee which lasted into the 1970’s when it was replaced by a much plainer marquee. By 1973 it was renamed Teatro Broadway, playing Spanish language movies. It was closed by Metropolitan Theatres in Summer of 1988. The theatre space has been divided down the middle to create two retail spaces.

It probably shouldn’t be added to Cinema Treasures, as it’s open only two nights a month, but the Broadway Theatre now has a cinematic neighbor of sorts called the Angel City Drive-In. It’s located at 240 W. 4th Street (corner of Broadway), on the upper level parking lot.

The place started out as the Million Dollar Drive-In, on August 25, 2007, and was originally located in the parking lot south of the Alexandria Hotel on Spring Street, with the movie projected onto the wall of the hotel. They soon changed the name to Angel City Drive-In, and the move to 4th Street seems to have been made in 2008.

They use a portable screen which appears to be mounted on the wall of the Judson Rives Building, and the projector will be perched atop a car. Here’s a weblog post from April 13, 2008, which includes a couple of photos of the impromptu drive-in.

There are many references to the Angel City Drive-In on the Internet, and the project has obviously attracted enough patronage to keep it going for two years now. There will never be a movie shown in the Broadway Theatre again, but it’s an interesting twist of fate that there are now movies being shown on the outside wall of its building.

I think it’s great when these classic houses upgrade to Spanish language format.

A little trivia: I worked at the Broadway from 1954-1956 as an usher, doorman, and assistant manager: I remember when the side marquees read (Line 1) GENTLEMEN (Line 2) PREFER BLONDES and (line 3) BLOWING WILD and a cop came by and told us we had to change it – Seems like someone had complained about our “dirty” marquee… .