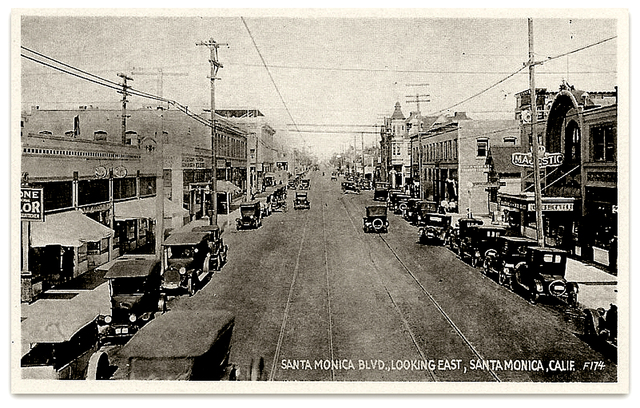 This theatre opened as the Santa Monica Opera House on December 12, 1911. Presenting legitimate theatre and movies, it was soon renamed Majestic Theatre.

Sadly, the theatre was damaged in the Northridge earthquake on January 17, 1994, and sat empty and unused until January 2011, when it was demolished, leaving only the façade standing.

At the time of closure, it was used for comedy and music acts.

It was one of four theatres in downtown Santa Monica, others being Fox Criterion Theatre, El Miro Theatre and the Hitching Post Theatre.

Even as pre-teens in the late ‘60s, we kids knew the Mayfair wasn’t up to par with the other local theatres like the Criterion, Wilshire and El Miro. For one, the screen seemed so much smaller, even smaller than an elementary school auditorium screen. Once, at intermission, we counted the rows of seats and I believe there were 15, maybe 20 at most. So of course films like “Marooned” and “The Battle of Britain” had much less impact than they would have at another, larger venue. (Unlike mv, I was too young to catch grindhouse fare like “Night of the Living Dead” and “The Corpse Grinders,” which probably would’ve made the Mayfair my favorite neighborhood theatre!) Other films, like Hitchcock’s “Topaz” and the Burt Reynolds missing link drama “Skullduggery” seemed duller than perhaps they really were. But the Mayfair definitely had a friendly, small-scale charm about it, especially for younger viewers. It was the first theatre I’d ever visited that had a restroom vending machine that sold magic tricks, rubber spiders and other novelty items…and where can you find that nowadays?

I just uploaded a flyer for a small Hitchcock festival in August 1972, my introduction to the Mayfair. I have Joseph Cotten’s signature on another part of it, which he graciously gave while chatting with people outside following “Shadow of a Doubt”.

The theater was indeed tiny. I enjoyed the films from the small balcony and the place felt ancient and almost rickety even then. But it had charm, too. The earthquake damage must have been inevitable, but I’m sorry to see it go.

Is the facade still standing, and if so, what is being built behind it?

Google Earth and Google Street View show the facade with the destruction behind it. (Bing Maps still shows the complete building!) Someone out there will have to update us on this.

I think it’s covered in the older comments, but this is yet another mixed retail/residential building that will keep the facade of the theater. The building is almost done. The last time I went by, the facade was in good shape, but all the signage, etc., had been stripped. I don’t know what, if anything, they are planning on putting back.

I went by the other day. The construction barriers are still up. There’s a marquee and blade sign (no name) on the front of the building now, but I’m not sure where they came from. Maybe they found the blade sign somewhere in the building; it wasn’t hanging up before this conversion. Also, the marquee is different (original 2-sided, now 3-sided), and the “Box Office” and “Alumni Bar” signs that were on either side have not returned.

There’s just a fence around the front of the building now. No retail yet; don’t know if the residential portion is available for rent…

I worked as an usherette in full uniform with flashlight at the Majestic Theater in Santa Monica in the summer of 1958. It was my first job and I was 15 yrs old. The place was impressive, smoothly running, and fun to work at. The only time I hated it was when they showed the film “Hot Rods from Hell” The sounds drove me crazy. I had to listen to those films over and over all day.

A shoe store has moved into the downstairs retail. The blade sign says “Shoe Palace” on it, with logos on the marquee.

The Mayfair Theatre auditorium was the location venue for the “Putting On The Ritz” scene in “Young Frankenstein”.