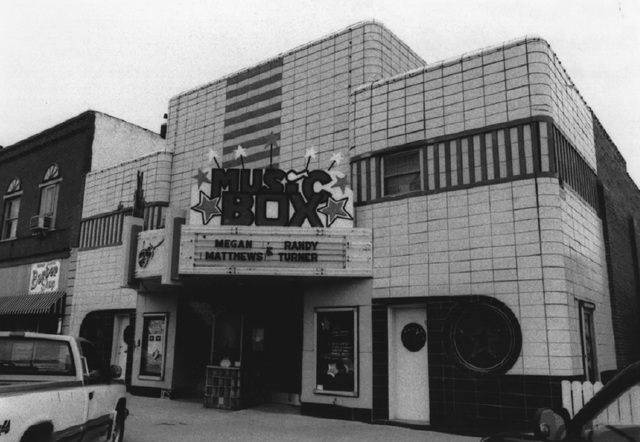 The 400-seat Plaza Theatre was remodeled in 1940 and suffered damage in 1941 following a flood. After closing as a movie house in 1989, the Plaza Theatre later became home to live entertainment, first as the Music Box Theatre, and later as the Burlington Opry, which closed around 2010. The theatre was listed to the National Register of Historic Places in 2005. A new roof was put on the building in 2019.

The Plaza Theatre was remodeled and redecorated at a cost of $25,000 in 1940, as described in an illustrated article in Boxoffice Magazine of August 17 that year. The architect for the project was Larry P. Larsen.

The NRHP document lostmemory links to says that the Plaza Theatre replaced another house of the same name that had operated on the site for one year, but doesn’t say what happened to the earlier theater. If you compare the photo of the Music Box in the NRHP document with the 1940 photo of the Plaza in the Boxoffice article Tinseltoes linked to, the basic structure of the marquee is the same.

The Boxoffice article says that the Plaza Theatre was 25x120 feet in size, while the NRHP document says that the current Plaza is approximately 50x110 feet. It looks to me like the owners of the Plaza might have decided that they had underestimated the potential demand when they built the house in 1940, so they expanded the theater in 1942. Of course it’s also possible that some disaster befell the 1940 building, but either way it’s obvious that the 1940 marquee was retained on the 1942 Plaza.

There was a significant flood in June, 1941 that damaged several buildings, and the Plaza Theater in Burlington was one of the worst damaged. This is probably why it was remodeled at that time. If you look at the front of the building, you can see the original structure in the middle, and then two “wings” built to each side, with a slightly lower roofline. The marquee is basically the same (it was covered by a plywood sign during its Opry days, but the “PLAZA” lettering is still there, although the neon tubing is in bad shape.

Website is dead, and the 2018 streetview has barriers on the sidewalk in front of the building, which is never a good sign.

You posted a closing notice back in 2010. Correct to closed, and now we can drop the hokey name and put it back to Plaza.

An April 23, 2019 Facebook post from a company called H & H Roofing and Restoration says that they had recently put a new roof on the Burlington Opry’s building. The barriers on the sidewalk in 2018 that SethG mentions might have been related to other renovations of some kind.

However, I can’t explain the disappearance of their web site. I can’t find even a Facebook page for the house. Maybe their renovations left them financially overextended and they had to shut down. But at least the building ought to be in good shape, with a new roof and all.