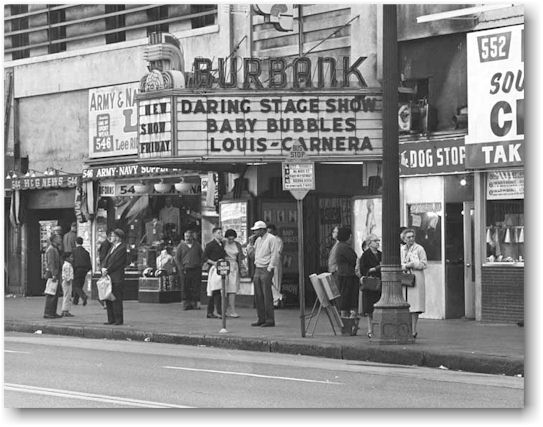 Construction began on the Burbank Theatre in 1887. It was opened by Dr. David Burbank and opened November 27, 1893. It was designed by architect Robert Brown Young. In 1899 it was leased out to Oliver Morosco. In late-1915 it was remodeled and reopened on January 15, 1916 as a movie theatre. Around 1937 the exterior was remodeled in an Art Deco style and became a newsreel theatre for a while. By the 1940’s it was offering movies and a burlesk show. By the 1950’s it was known as the Burbank Follies. It was demolished in 1973 and the site became a parking lot. In 2018 apartments had been built on the site.

Yes, I saw it. It was kind of hard to tell, but it did look kind of vacant. There’s another movie on that disc called A Piece Of The Action that I haven’t watched yet. I don’t know if it was filmed in Los Angeles.

The Burbank was long gone when I moved to LA in 1984. I think the Art and Optic were still around, though. I lived downtown the first two weeks I was here, but I never made it over to Main Street, so I don’t recall seeing any of those theaters.

The Burbank is on the right in this circa 1950s photo:
http://tinyurl.com/cqooxp

The Burbank Theatre was also known as “Morosco’s Burbank Theatre.” I have the brochure for the “Fiftieth Anniversary Testimonial to Harry S. Duffield,” held at Morosco’s Burbank Theatre, Tuesday Afternoon, September 10, 1912. My grandmother’s company played there. She (Sophia Caldwell (also known as Virginia Richmond) ) was a West Virginia silent film acress and vaudeville actress studying with the Egan School of Music and Drama, then celebrating its fourth year. I’ll be happy to scan a copy of the flyer for anyone who is interested. Larry Winter Roeder, Jr. www.artbyroeder.com

Although I’ve never found any photos of the interior of the Burbank from its later years, and I was never inside the theater myself, friends who did go there in the early 1960s told me that the interior was still very old fashioned. I don’t think that the 1930s remodeling, or any later remodeling, made any significant stylistic change to the interior of the theater. Essentially all that was done was to slap a streamline modern facade onto the old building and clean up the lobby a bit.

A bit of the original interior style is revealed in the two photos I have found, both from 1898 (the proscenium and the men’s lounge) and though it’s possible that these were altered by one of the early 20th century remodelings, I’m quite sure that there was nothing particularly Art Deco about the place. Main Street was already in decline by the time the Art Deco style emerged in the 1920s, and nobody would have been spending money to update an old theater there with anything as costly as Art Deco. One advantage of Streamline Modern, emerging during the depression of the 1930s, was that it was simple and could be done on the cheap.

The original exterior was of course Romanesque Revival, but the early interior looks to have been that awkward Victorian pastiche of styles that, in America at least, often went by the misleading name Queen Anne, or sometimes the somewhat more appropriate name Eastlake, after the English architect and writer Charles Locke Eastlake, who promoted a somewhat similar style in Victorian Britain.