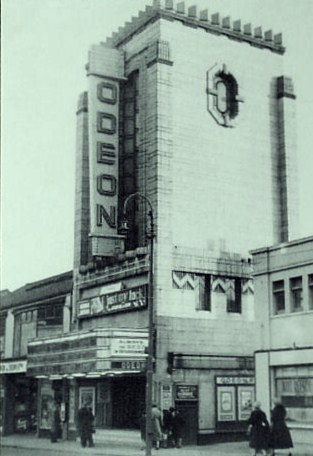 Black’s Regal Theatre was built on the site of the Olympia Exhibition Hall and Pleasuredrome (1897-1910) and it was built for the northern independent Black’s circuit. It opened on 28th March 1932 with Jessie Matthews in “Out of the Blue”.

The theatre was equipped with a Compton 3Manual/9Ranks theatre organ which had an Art Deco style console on a lift. This was opened by organist J. Arnold Eagle. The policy of the theatre for many years was pictures and variety and it had a 57 feet wide proscenium, the stage was 40 feet deep and there were 10 dressing rooms. Other facilities included a cafe and roller rink.

In 1955 the Black’s circuit was taken over by the Rank Organisation and the Regal was re-named Odeon from 28th November 1955. It was divided into a three screen cinema in 1975 with 1,200 seats in the former circle and two 150 seat screens in the rear stalls.

On 28th March 1982 a special 50th Anniversary concert was given by Phil Kelsall on the Compton organ. Three months later, on 26th June 1982 the Odeon was closed with “One Flew Over the Cuckoo’s Nest”, “Star Wars” & “The Empire Strikes Back”, “Mary Millington’s True Blue Confessions”. The building was boarded up and abandonded for a long period of time.

However it was to re-open as a Top Rank Bingo Club and remains in use today as a Mecca Bingo Club. The sub-division of the auditorium has been removed. In July 2009, it was announced that the building and the entire block had been the subject of a compulsory purchase order. In 2019 it is threatened by Sunderland’s City Council’s redevelopment plans.

I don’t think Fairworld took over the Newcastle Studio’s Dave, certainly not in my time in the NE (I moved away in 1993). Screen size I always appreciated the one we had in the Odeon Cinema 1, that was massive and we moved it a few times for events such as when Big Daddy and the other wrestlers of their time came to town. The thing weighed a ton, we did have a laugh moving it back into place so the Sat morning movie club could enjoy another session with Keith Chegwin in some role or other! I wish that we had done more shows and gigs at the Odeon, it had the capacity and the stage to have been so much more but there you go. I must try and get in to have a look around next time I’m up that way, take some pictures and relive the memory’s. I did get into the old ABC when it became a nightclub!! It looked like nothing on earth!

I remember Big Daddy coming to The Savoy too, was packed. The odeon screen 1 screen was big, not many of the old cinemas had big screens but that one certainly did. All the ones I worked at had relatively small screens compared to the auditorium. Thankfully the new Odeon at Metrocentre has very large screens, incl an IMAX theatre, awesome!! The last cinema I worked at was Blyth and it is now a Wetherspoon pub but hasn’t changed much to when it was the cinema, a very sympathetic converion. I was projectionist there for many years, loved it.

I have to agree about the screens in older cinemas often being rather on the small side in relation to the auditorium size. Where I worked with ABC (too numerous to list here) the screens were either very large or vice versa with no happy medium.

However, below are links to surviving footage of venues which had very large screens. In the case of Blackpool (ABC as opposed to the Princess where we also had 70mm) the screen is not seen but there are some distance shots of the 60 + feet wide pros which provide an indication of how large the screen was.

ABC Blackpool (First ever public performance of ‘Yesterday’ – watch out for star line up at the very end):–

My apologies for posting the above on a page devoted to an Odeon but a great deal of cross referencing does occur on the CT site……..

Wow Terry, thank you so much for the information. I’ll check the sites out on the computer as I’ll get a better image. Bet they were very impressive cinemas.

I’m thinking the screen in the former ABC Blackpool must be of similar size to the screen at the Metrocentre Odeon screen 7, the widescreen is 60ft X 31ft. The ABC must’ve been very impressive. I only saw films in it once it had been twinned (or maybe tripled). You have a wealth of valuable memories Terry.

Thorn-EMI made a mess of Blackpool ABC when, in the tripling process, they isolated the stage (which had a revolve), dressing room block and front stalls all those years ago. It was all reversible, however, just in case the need for large capacities and stage spectaculars should ever return. The acquisition and closure by Odeon and subsequent conversion to ‘The Syndicate’ put paid to that, however.

Suppose it’s fate was secured because of the amount of theatres that already exist in Blackpool. We found an advertising reel in your former stomping ground (ABC South Shields) for the summer season at ABC Blackpool with Cilla Black featured, we used to often run it for private use. I think my friend might still have it on a reel.

(My apology too for straying from the attended use of this site, however the memories of the Odeon Sunderland evoked memories of other old cinemas that arose because of the said cinema).

Was this the show with ‘The Bachelors’ or Roy Castle? Either way, it would be interesting to see it and I wish I had known it was still at ABC South Shields when I was there, Dave! Would it be very expensive to have the 35mm filmlet you mention transferred to DVD and uploaded to YouTube?

Interesting article below but, as always, with inaccuracies. The 1200 seats of screen 1 were not all in the former circle which seated 737. In the case of Sunderland, the front stalls was retained and this ‘overflow’ area (rarely used for films) brought the number one auditorium capacity up to 1200.

I was there with my very good friend, Manager, Brett Childes on the last night of operation and the films were:–

So, the Echo omits to mention the film showing in the main part of the building on the final day of operation of Sunderland’s finest cinema!

I completed the Business Report for Brett, one of the most decent and genuine people in the business, who understandably was upset by the finality of the Odeon. Afterwards he came back to our house in Shildon and stayed with us for a couple of hours or so chatting mainly with my Dad whose favourite cinema had always been Black’s Regal. I remember Brett telling my Dad that there were not many patrons in the main auditorium for ‘One Flew Over The Cuckoo’s Nest’ but that Screen 2 was full with the ‘Star Wars’ double bill. I don’t think he mentioned ‘Mary Millington’…..

Brett’s overall summing up to my Dad was “They could have saved the place, you know!”.

As highlighted in the article, it is heartening to see that the former Odeon/Black’s Regal still looks very ‘cinematic’ and that so many original features remain. It is regrettable, however, that they saw fit to remove the Compton organ……

Of course, Mecca are one of the few remaining operations owned by the once mighty Rank Organisation so one could argue that it has been under the same ownership since 1955.

Impressed as I am by the appearance of the building, I do not doubt for one moment that, given the opportunity, Rank/Mecca would vacate the building and move to new premises as they have done at the following locations:–

•Stockton ABC Globe (undergoing restoration and arguably equal in architectural merit – or soon will be again – to Sunderland Odeon/Regal).

•Wallsend ABC Ritz (immaculately maintained, as in the case of Sunderland, but closed by Rank/Mecca and subsequently ruined by Wetherspoon’s).

•South Shields Regent (attempt underway to preserve it but I do not care much for its chances).

Should the Sunderland venue ever cease to serve its current function it is unlikely that , as in the case of Stockton, it will be restored to theatrical use owing to the presence of the 2,000 capacity Empire Theatre so it is indeed to be hoped that Mecca continue to successfully operate their Bingo Club there.