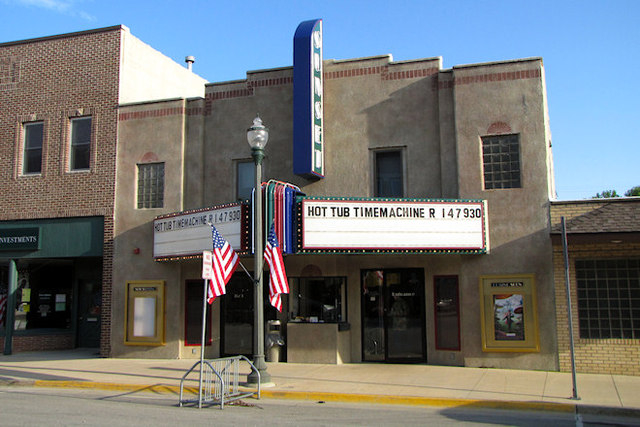 The Sunset Theatre is a fully rebuilt 1940’s style single screen cinema and live performance theatre. It is equipped with the latest American made projector and Dolby Digital Surround Sound. This family cinema is open 365 days a year offering both contemporary and classic films at just .99 a ticket. The theatre stage also holds live theatre performances throughout the year.

Originally opened in 1948 by Harry Pace. It was shut down in the early-1980’s and after a brief attempt by the Jaycees to operate it, it was sold and turned into a fitness center.

In 2000, efforts to restore the theater began. The theatre currently averages over 5,000 patrons a month in a rural, non county seat town in north eastern Iowa.

I was introduced to the projection room at the Sunset in 1959 by Harry Pace and his son-in-law, Lloyd Johnston. I was barely thirteen years old. By this time Harry had mostly turned over the day to day operation to Lloyd and his wife, (Harry’s daughter), Pat.
My grandfather and Harry were golfing buddies with several rounds played each week at Meadowbrook and every Sunday night we would travel from Tripoli to Sumner to watch the movie. That one Sunday night when Harry took me upstairs to the projection room did it for me. From then on my Sunday nights were spent with my mentor Lloyd instructing me in the discipline of operating 35mm film projection equipment for the enjoyment of the movie going public. At show time, Harry would go down front and prompt us in the projection room with his flashlight to start the movie and he would manually open the curtain that covered that magnificient screen. It was a big deal.
The Sunset had state of the art projection and sound in those years.
Motiograph Model K projectors on Motiograph SH7500 optical sound heads and Motiograph sound system. The carbon arc lamps were Strong Mogul burning 7mm negative and 8mm positive carbons at 70 amps D.C.
Changeover between the two projectors was accomplished by means of a manual slide bar mechanism that had been fabricated from wood and tin.
I have now spent 49 years in the art of putting the larger than life images on to the big screen for the movie going public and I remain
indebted to Harry Pace, Lloyd Johnston and The Sunset Theatre in Sumner, Iowa for this life long inspiration.
Respectfully Submitted,
Ben Kehe
Motion Picture Projection Services, Inc.
Tulsa, Oklahoma
918 906 3715

One of the original two projectors from the Sunset Theatre can be viewed at the following website: www.film-tech.com
Just click on the pictures link and you will see the projector that was located in the #1, left machine, position in the Sunset’s projection room.
Enjoy!!!
Ben Kehe

The Sunset was purchased by Gerald Peterson of Peterson Theatres of Waverly Iowa in 1969. I believe we purchased it from Claude Waskow who owned the restaurant an few doors to the east. It was scrubed, cleaned, painted along with a remodel of the lobby and restrooms. It opened on Christmas day of 1969 and was open until about 1983.

Sumner, December 18, 1969:
Sunset Theatre to close doors.
Sunset Theatre will close its doors following the showing of the “Where Eagles Dare”, scheduled for January 2, 3 and 4, 1970, according to Theatre manager Jerry Waskow.
Reason for closing the theatre is very simple, Waskow explained. “Lack of business”. I just can’t continue to operate when I have to subsidize the theatre out of my own pocket. I am aware that the theatre can be an asset to the community, or at least I think it is. But there is no point in my attempting to keep it open any longer when it isn’t self supporting."

Waskow said he wouldn’t even mind operating the theatre if he could break even. “I’d keep it going if I could come out even, just to provide the young people with a place to meet and spend their time, but I cannot afford to keep going when I have to make up losses out of my own funds.”

“If there is anyone who can come up with a constructive idea on how the theatre can be kept open and operating, I would certainly like to hear about it,” Waskow said. “I know itâ€™s been discussed and there have been many people who have suggested ways the operation of the theatre could be changed. I don’t question that the operation of the theatre could be improved, if there were improvements made to the facilties, but there would still have to be more and continuing attendance before myself or anyone else could keep the theatre going even on a break-even basis.”

This isn’t the first time the Sunset Theatre has had to close down for lack of business. Since the advent of Television in the early â€˜50s the local theatre has been on the decline. For several years it was operated by the Sumner Jaycees organization, and was subsidized during this period by the Sumner Commercial Club.

Waskow has managed to keep the theatre going for the past several years, but the building has continued to deteriorate, and the equipment is also greatly in need of repair.

Surprisingly, Waskow has been able to book first rate pictures all along during the time he has been operating the theatre.

With a new generation now on the scene, brought up with
TV and not quite as attached to it as the oldsters, it would seem that theatre entertainment will enjoy a revival.
It is noted that a number of theatres, closed for an extended period of time are reopening. In this area, it is reported that the theatre at West Union now plans a reopening in a completely remodeled building, and theatres in the larger cities in this area still continue to operate and apparently are able to bear their own financial burden. “I couldn’t guarantee that renovation of the building and equipment, including the seating, screen and projectors, and installation of an air conditioner would bring back the theatre business, but it surely would be interesting to find out,” Waskow said. “I’m still convinced that this community, drawing from other nearby areas, including the college at Fayette, can support a theatre, but not under present conditions. The theatre has to be a special place, for a boy to take his girl, or a man to take his wife, but the theatre here at present cannot be considered in this light. Some repairing will have to be done before it can be
acceptable to the public.”

The theatre is owned by ten men, some of whom are businessmen in Sumner and others who are former businessmen now residing in other communities. The owners are apparently reluctant to authorize needed repairs without first having assurance that the community will support the theatre.

Anyone who may have any suggestions regarding the theatre should contact Waskow or any member of the Sumner Commercial Club board of directors. There is no question but what Waskow will close down the theatre as of Monday, Jan. 5, 1970, but it is also not impossible that a reopening could occur sometime in the future, should some concrete method of a workable operation, momentarily satisfactory, be arrived at.

Several articles in various issues of Boxoffice from 1948 mention Harry Pace and the building of the Sunset Theatre. Prior to building the Sunset, Harry Pace operated the Sumner Theatre, for which the Sunset was a replacement. Pace bought the Sumner from L.L. Wells in 1944, according to Boxoffice Magazine of December 2, 1944.

The opening of the Sunset was announced in the December 11, 1948, issue of Boxoffice. The item had very little information about the theater, but quite a bit about Harry Pace. He was born in Elkpoint, South Dakota, and played professional baseball in the South Dakota, Nebraska, and Iowa State leagues for twelve years prior to buying his first theater, the Cottage Inn at Orange City, Iowa, in 1916. After that he operated many different theaters in many Iowa cities until 1941, when he went to California for three years, finally returning to settle at Sumner in 1944.

Pace operated the Sunset until 1957, when he sold the property to a group of local businessmen who leased the theatre to William DeHaven and Fred Yungtum, according to an item in Boxoffice of March 2, 1957. These partners apparently failed, as the house was soon leased to a Mr. and Mrs. Gene Phelps, and then to Mrs. Lloyd Johnston, Harry Pace’s daughter. By 1963, the house was being operated by the local Jaycees club, as reported in the July 15 issue of Boxoffice that year. The October 24, 1966, issue reported that the Sunset had closed due to lack of patrons. After that Boxoffice must have lost interest in Sumner, as I don’t find it mentioned again.

Tantalizing is a September 14, 1940, Boxoffice columnist’s mention of “…Gilly and Ruby Wells' boy….” having “…taken over the Opera House at Sumner, Ia.” The Sumner Theatre must have been known as the Opera House before it was operated by L.L. Wells. The item says that it had previously been operated by a member of the Cass family, who apparently operated theaters in a number of Iowa locations. Then the February 11, 1950, issue of Boxoffice reported that there were plans to convert the old Opera House at Sumner into a chicken hatchery. Strange fate for a theater.