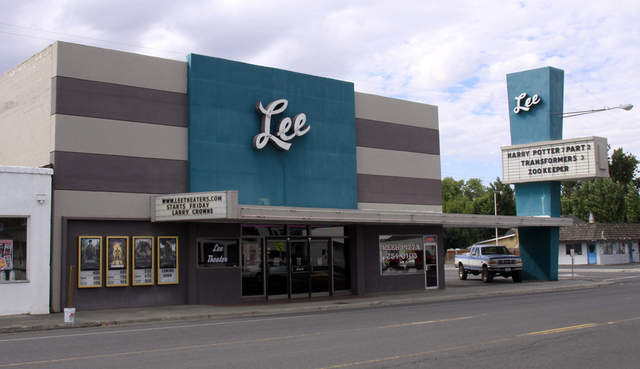 The Moderne style, originally single-screen Lee Theater on Basin Street was opened in 1952. It has been triplexed. Today, the main auditorium has tables set up for patrons to eat and drink at, as the Lee Theater is also home to a pizzeria, the Reel Pizza Place. Two smaller auditoriums are located in the former balcony space.

Does anyone have contact info for this theater besides the movie line and street address? I’d love to talk to the owners/operators about the building’s history.

Here is a December 2008 ad from the Quincy Valley Post-Register:
http://tinyurl.com/m7mprm

I posted this before I realized I needed to register. I’ve fond memories of the Lee, dating back to the late 50’s and on. It was originally established to serve two thriving military bases in the 40’s I believe. One in Ephrata and one in Moses Lake. My first memory of the Lee was my older brother taking me to see Blue Hawaii, although I was NOT an Elvis fan, it mesmerized me. The Lee was a modest establishment for the lower middle class. Many teens worked after school and summers moving hand lines to earn enough to take their dates to the movies. Those were the days of ushers, talking about the mid 60s now, that patroled with their flashlights so no ‘making out’ would be allowed. Those that wanted to make out, bought the more expensive tickets to sit upstairs in what we called the louges, not lounges. (small town, poor education, lack of world experience) The ushers were kind enough to allow a little ‘fooling’ around for the privilege of sitting up there. Few years ago, they “sold out” by going multi plex, three screens out of one. They put in nice restaurant quality booths, circular in design for people who wanted pizza at the same time, was/is excellent for families so the little ones could sleep and the rest could enjoy the movie. The staff at the Lee is friendly and glad to see you there. Many times there have been just 6 or so people watching one movie, i don’t know how they can afford to run it but I for one am glad they do. It makes it a good experience, especially for a family with absolutely one of the best pizza’s I’ve had to boot. Yeah the popcorn is spendy but oh well. So if you ever travel thru Eastern Washington, and the small town of Ephrata, stop by for Pizza and a Movie, I don’t think youll be disappointed. P.

Many of the quaint little villages, tucked away off the main thoroughfares along the west coast,such as Ephrata are like stepping back in time to the middle of the twentieth century. Great little theatre, great staff, neat town, great vibes.

On the MarJo Theatre page I cited a PDF which has since vanished from the Internet. My comment of October 7, 2016 there says that the history of Ephrata’s theaters in the document said that the Lee Theatre opened in 1952. I don’t know why I didn’t cite it on this page then instead of waiting until now.