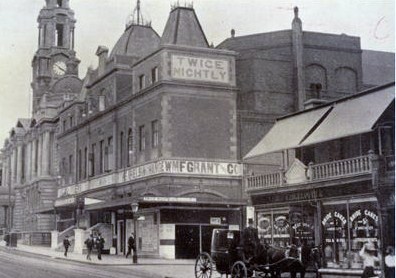 Located in the southeast London district of Woolwich. The Grand Theatre and Opera House opened on 18th October 1900. It was located on Wellington Street, adjacent to Woolwich Town Hall. Seating was provided for 95 in the stalls, 659 in the pit, 363 in the dress circle and 592 in the gallery. There were also boxes which seated a total of 32. In March 1907 the Grand Theatre was taken over by Walter Gibbons and films began to be screened as part of the variety programme.

From 1908 it was re-named Woolwich Hippodrome Theatre presenting twice nightly variety shows. On 10th December 1923 a Compton 2Manual straight organ was installed and from November 1924 the Hippodrome Theatre was converted into full time cinema use. Taken over by United Picture Theatres Ltd. in 1928 it was later taken over by Associated British Cinemas(ABC) from July 1935.

The Woolwich Hippodrome Theatre was closed in 1939 and demolished to enable a new ABC Regal Cinema to be built on the site. Building work had commenced when war broke out and all construction was halted. The Regal Cinema eventually opened in September 1955.