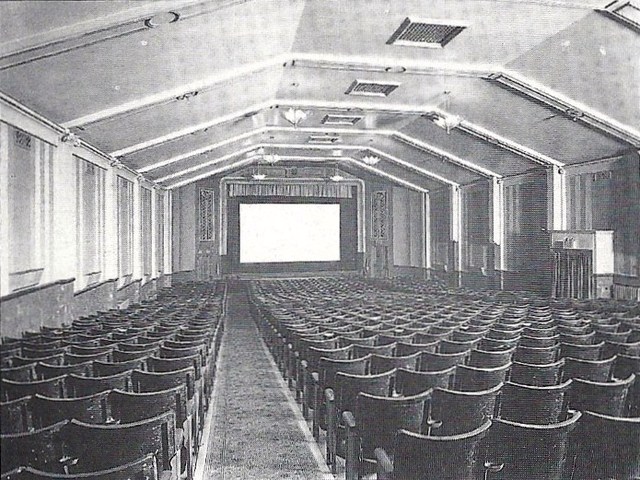 Located in the southeast London district of Woolwich, close to the Woolwich Arsenal. The Cinema opened on 20th October 1913 with 650 seats, and it was operated by the Arsenal Cinema Co. It was equipped with four dressing rooms for artistes who may have appeared on the 8 foot deep stage. The proscenium was 24 feet wide.

In the early-1930’s, it was expanded to seat 900, and was operated by the small local Selwyn Cinema circuit. By 1937 it was operated by the London & District Cinemas Ltd. chain. The Cinema was taken over by the Granada Theatres chain in November 1952, and in September 1953, it was re-named Century Cinema.

The Century Cinema was closed on 27th May 1961 with Pat Boone in "All Hands on Deck" and Lex Barker in “The Deerslayer”. It then stood empty and unused until it was demolished in late-1968. A supermarket was built on the site, in 2010 this is operated by Iceland.

ny info or photos anyone.

I remember this cinema well.As regards the chain it may have been part of prior to Granada,I recall on the side of the building it was advertised as “A Selwyn Cinema” in the late 1940s & early1950s.I recall reading this many times as a schoolboy as I queued for a bus to take me home to nearby Plumstead.
Maybe others can confirm if “Selwyn"is known as a cinema chain at that time.At onetime in the late 50s there were 4 cinemas in Woolwich…"The Century”,“The Regal”,“The Odeon” & “The Granada”.Now as far as I’m aware there are none although the last 3 still stand but are used for other purposes.I expect & hope the last 2 have presevation orders on them for they are remarkable pieces of architecture.

nouvelle vague; From at least 1944 through to the sale to Granada Theatres in November 1952, the Cinema was operated by and owned by H.P. Selwyn and he booked the films at the hall. I have not heard of a Selwyn Circuit, so this was probably the only cinema he owned, but there ‘may’ have been one or two more, judging by the wording you saw on the side of the building. Or the wording could just have been a self promotion on his own behalf.

Thanks for the information Ken.I think you’re probably right & there was no Selwyn “chain”.I don’t remember seeing the name on several of the other independant cinemas in the area,including that odd little place on Plumstead Common(if you know the area)I think called the"Savoy".

Just a couple of corrections to this listing – it was NEVER called the Arsenal Cinema as is stated, its name from opening until it was renamed the Century was simply the CINEMA and, although it did get referred to in trade press reports etc as the Arsenal Cinema (and, in fact, that was the name of the original operating company), the term was strictly generic by virtue of the fact it was opposite the entrance to the Woolwich Arsenal…it never operated under that name. Secondly, it NEVER became a bingo hall…this information has presumably been copied from the error that appeared in the GRANADA THEATRES book which states the same. Granada initially used the name “Century Bingo Club” for its bingo operations, regardless of whether the “host” building had actually been a Granada or a Century, and at Woolwich “Century Bingo” sessions were advertised to start AT THE GRANADA Woolwich in August 1961, but were then postponed until December. The Century never ran bingo sessions as stated – it remained empty from closure until demolition in late 1968.

PS…H.P.Selwyn owned a number of cinemas in and around the Woolwich and Greenwich area, and I believe the sign mentioned would have been displayed at each of the halls that were part of this small circuit.

Information taken from The Cinematograph Exhibitors' Association of Great Britain and Ireland Annual summer conference 1931 program.“H. P. SELWYN. One of the Pioneers of the Industry was responsible for exhibiting films at the old Surrey Theatre in London, in 1901. Vice-Chairman of the London and Home Counties Branch, and Delegate to the General Council. Sole Proprietor of the Empire, Greenwich ; Hippodrome, Greenwich ; Cinema, Woolwich ; Premier, Woolwich. A Liveryman of the City of London.” http://docplayer.net/11607830-The-cinematograph-exhibitors-association-of-great-britain-and-ireland-registered-no-1622t.html