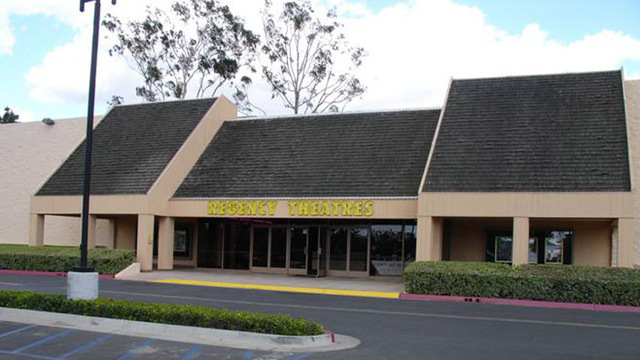 Opened in 1972 as a first run theatre, converted to art/independent/revival in the 80’s. Formerly an Edwards Theatre, later as part of Regal Entertainment Group, the property is located directly across the street from South Coast Plaza (facing Nordstroms). The theatre was allowed to fall in to disrepair, under REG, and closed in January 2007. Regency Theatres picked up the lease, remodeled, and reopened the theatre in March 2007.

The theatre has a no frills, purely functional, layout. A large auditorium (formely 500+ seats, but slightly less after the remodel) on one side, two smaller auditoriums on the other. The small lobby is divided by a peninsula style concession stand, that doubles as the venue’s box office. Following the remodel, lounge furniture was added to the lobby.

Previous to Edwards ownership, this theater was owned by the United Artists Theater Chain for many years.

Noticed in my weekly email from Regency on forthcoming showtimes that the South Coast Village will be featuring reserved luxury seating with swivel tables staring in April. I can see that working in the large auditorium, not so much in the two little ones. Should be interesting.

With the 40th anniversary of “Grease” over the weekend, I was reminded by an old newspaper ad that this is where I saw the film as a seven-year-old opening weekend back in 1978. According to the ad, the film showed on two of the three screens, probably for the rest of the summer, if not the year.

How this little three-screen theater in the heart of the toney, Segerstrom-controlled South Coast Metro area survived five decades while all of its nearby contemporaries (SCP III, the Town Center & Bristol IV) fell under the wrecking ball decades ago is anyone’s guess.

I want to say it & the Big Newport are now the longest-operating theaters in Orange County.

Kudos to UA, Edwards (then Regal) & Regency for keeping things going amid the multiplex craze, DVD/streaming era & a global pandemic.

As 2021 closes out, the five oldest operating cinemas in Orange County are: