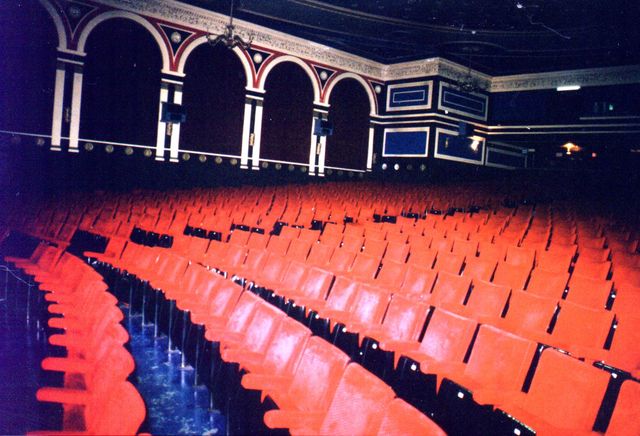 The Tivoli Theatre was the home of vaudeville shows and movies from its opening on September 29, 1924. In 1950, the Tivoli Theatre started showing movies full time and was operated by Famous Players Corp. It was remodeled in 1954. It remained a popular movie house until it closed in 1990.

In 1995, the Tivoli Theatre returned to its roots as a venue for live stage shows. Closed in 2004 after a portion of the frontage collapsed, the lobby area was demolished, but the auditorium remains and by 2014 is in use by the Canadian Ballet Youth Ensemble.

I was employed as ass’t mgr and did some maintenance at the Tivoli in the early 70’s. I amazes me the historical misinformation that exists about this place. The theatre was built in 1908 and went by several names (Wonderland, Colonial etc.) It was a vaudville theatre until the 1920’s. During these years many of the biggest stars of the day performed here. Many went on to great sucess in Hollywood. In 1925 Famous Players built the large auditorium on the back, and the front of the theatre became the long lobby.The entire theatre was done in Italian Renaissance style with frescos,tapestries and roman statues in the auditorium wall recesses. A massive pipe organ was installed with pipe lofts inthe front recesses on either side.In 1954 the theatre was remodelled again and many of the 1925 fixtures were either removed or hidden behind walls and curtains. Her heydays were over by the early 1970’s and she was reduced to soft core sex movies until Famous Players let her go. Most of my information comes from old files, photos and first hand accounts by those who worked here during the golden years of this fine old lady. One of the biggest movies ever to show here was Gone With The Wind in 1939. According to receipt books I found, the show sold out every performance from 9am till late night every day for weeks. The adult admission price was 35 cents.

Good information Brock — the original owners of the Tivoli property would NOT sell to Famous Players Canadian Corporation and so Famous created a “fake” company to acquire it and they sold to this “fake” company!!

BrockKing13: The Colonial/Wonderland/Princess has a its own page at Cinema Treasures.

This theatre and the Century were my two favorites of all time. When I worked there I did a lot of exploring. All the history and ‘ghosts’ never leave my memory. Thanks Joe, I will check out the page.

The auditorium still stands and is being restored for use by the Canadian Ballet Youth Ensemble.

BrockKing13… Regarding your “Gone with the Wind” comment from July 15th, 2013, it would appear you’re confusing the original run with the film’s 1941 general release or a later re-release. While I was researching the original release of “GWTW” for this retrospective article I found the first run in Hamilton was actually at the Capitol in February 1940. And it was a roadshow (reserved seats) and so the cost of admission was more than the 35 cents you’re recalling (much closer to a dollar). It ran for two weeks followed by a one-week moveover run at the Savoy.

Saw so many great movies at the Tivoli during the 80s — Raiders (6 times during the summer of ‘81), Star Wars/Empire double bill in early '83, Jedi a few months later, Never Cry Wolf, Aliens…too many to list. Loved the huge screen and great surround sound. I did see the last movie ever shown there (Last Crusade) sometime before the theater closed in Sept of '89. Great memories, like the Century and Avon, but the Tivoli was my favourite.

I wonder if anyone remembers a man by the name of Johnny Claus, he used to put up the posters for the theatre in the 50’s. His wife’s name was Grace and they lived on George St.