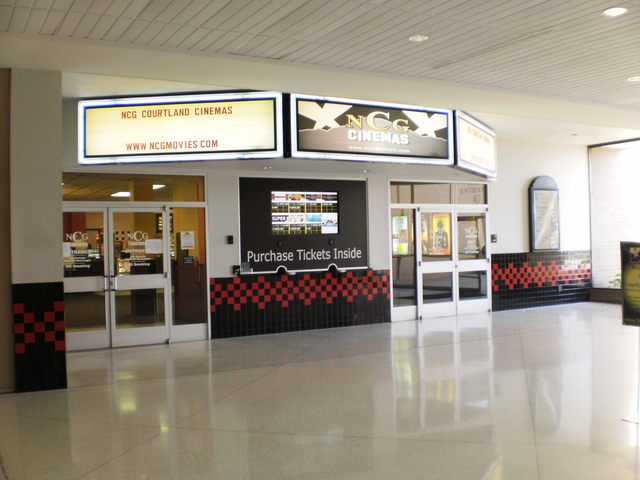 After several unsuccessful attempts to reopen it, Silver Cinemas reopened it on November 6, 1998 as the Silver Cinemas after expanding it to six screens with all-stadium seating. National Amusements took it over on April 5, 1999, converting it into a second-run bargain-priced house.

NCG did a nice job in getting this cinema going again. All screens are digital with stadium seating and they moved equipment from the Clio Cinemas which they recently closed into this cinema.

According to http://burtonview.mihomepaper.com/news/2011-05-19/News/NCG_Movies_to_reopen_Courtland_Cinemas_this_Friday.html this cinema was expanded and renovated in 1998 by the Silver Cinemas chain and renamed Silver Cinemas which added four additional screens and renovated the two existing screens with stadium seating, reclining seats and cupholders. National Amusements bought it just months later and renamed the theater back to Courtland Cinemas.

The original operator of this cinema was the United Detroit Theatres unit of ABC Theatres. When ABC exited the theater business, Plitt Theatres took over. Plitt sold it to National Amusements before it first closed in the mid-1980s.

When the theater opened in 1969, its entrance was very plain looking with just a channel letter sign above the entrance saying “Mall Theatre.” Before Silver Cinemas reopened it in 1998, they also revamped the entrance adding the nice tile work and the marquee over the entrance.

Taken over by National Amusements on December 17th, 1982. Another ad posted.

this reopened as the Eastland Twin Cinema on December 16th, 1983. Another ad posted. More to come.

Closed by National Amusements in 1991.

Reopened by Silver Cinemas with 6 screens on November 6th, 1998 as the first all-stadium seating cinema in town and taken over by National Amusements on April 5th, 1999. More grand opening ads posted.