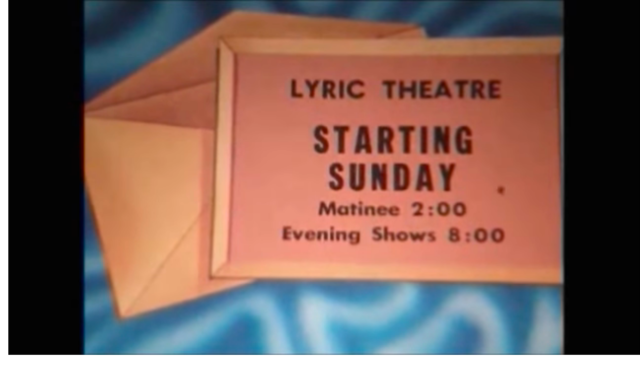 The Lyric Theatre is located along Seneca Street in Oil City, PA in between the Transit Building Annex and the IOOF building. For about 40 years its lobby served as the sales floor for Ray L. Way, a local haberdashery which closed in the early-2000’s.

The Oil City Community Playhouse has been renovating it for the past several years with plans to use the space for live performances. Local folklore has it that Charlie Chaplin did some of his first American performances there.

Ray L. Way and son, Richard L. Way, peer at a remnant of the old Lyric Theater which once occupied the site where a clothing store is now located. The elaborate design which Ray is touching borders the old stage which now serves as a storage and tailoring area in back of the sales section. The store moved into the former Lyric Theater building in 1955. Prior to the Lyric, this site was occupied by the Cameo Theater, before that the Princess Theater and before that the Orpheum Theater. Actually, the Lyric started housing audiences in 1917 at 106-108 Seneca St., moving to 216 Seneca St. in 1927.

Late 1940’s 12 Cents Admission, Oater’s and Serial’s all day all evening, and you could stay and watch them over and over !