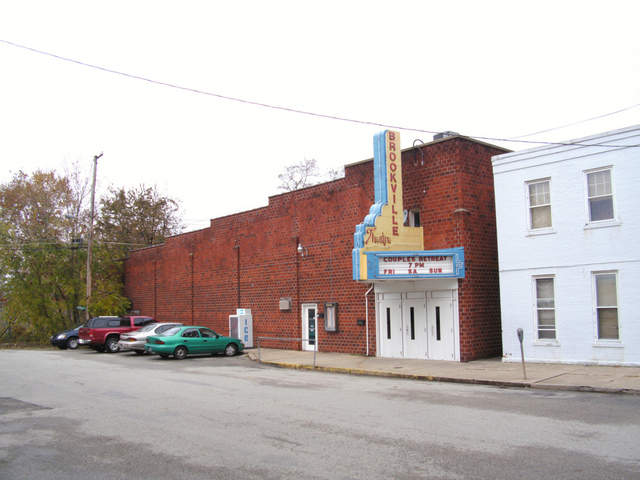 The Morin Theatre opened in 1937 and continued with that name to 1950 when it was operated by Affiliated Theaters Inc. of Indianapolis, IN. It was still named Morin Theatre in 1957 and was later renamed Brookville Theatre. It was closed in November 2014. It had reopened by November 2016 as a twin-screen theatre.

Awesome. I saw “Porky’s” here in June of 1981. IIRC, they sold Coke’s in the small bottles, which were rolled down under the seats when people were finished. I want to say that the seats were folding cafeteria chairs, but I might be mixing this one up with another theatre.

The “Theater Changes” section of The Film Daily of October 4, 1937, listed the Morin Theatre at Brookville, Indiana, as a new house.

Good news. I was at the Brookville Theatre on Saturday night (2/15/14) to see “Ride Along” and was told the theater will be divided into two auditoriums and digital projectors will be installed later this year.

Note: the theatre’s website is dead. It is showing a movie 2.5 years .

It is is good they are going digital. But to cut the theatre in half and invest in 2 digital projectors. Instead of keeping the theater as it is and only getting one projector. Would they really generate enough revenue with 2 screens? I am not sure it is worth the $$$ for the renovation and projector etc. Keep her a single screen!

This theatre is still not open. The latest entry on their Facebook page is from November, 2014. The phone is discontected also.

Please note the Brookville Theatre is open with two screens and digital projection. Movie showtimes can be found on their Facebook page or by calling their recorded line: 765-647-4421.