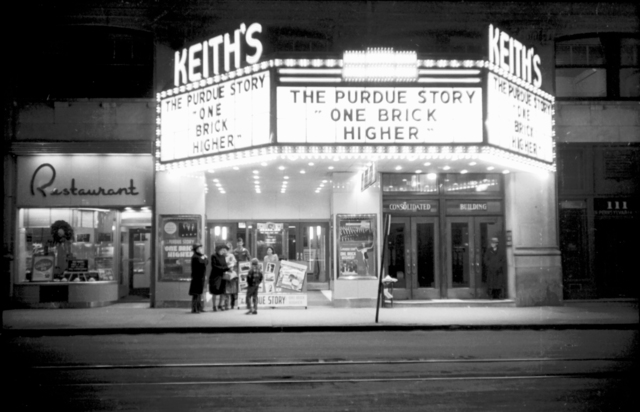 Originally opened on 13th September 1875 as the Grand Opera House (architect Wallace Hume of Chicago). The seating capacity was given as 1,608.

In 1907, the theatre was re-built to the plans of architectural firm R.P. Daggett & Co. utilising three of the original walls of the old theatre and it re-opened on 5th September 1910 as B.F. Keith’s Theater.

The 1941 edition of Film Daily Yearbook lists the Keith’s Theater as ‘Closed’, but it is operating again in the 1943 edition. The address is given as 118 N. Pennsylvania Street, Indianapolis in these two editions, but in the 1950 edition of F.D.Y. the street number is 117.

The interior was rebuilt again in 1957 and Keith’s Theater finally closed on 30th July 1964.

Advertised as early as 1912 in the Indianapolis Star, assuming B.F. Keith’s is the same theater. A 1970 story states the Keith had been renovated and was being used for offices at that time. I don’t see a later reference to the actual demolition of the theater, but if I do I will pass it along.

The Grand Opera House is listed in the 1897-98 edition of the Julius Cahn Official Theatrical Guide. It had 1,900 seats: orchestra-650; Balcony- 450; Gallery-800. The auditorium was on the ground floor and had both gas and electric illumination. The proscenium opening was 34 feet wide X 29 feet high, and the stage was 39 feet deep. The Managers were Dickson & Talbot. Other theaters in Indianapolis at that time were the English Opera House, the Empire and the Park. The 1897 population was 125,000.

When the Grand Opera House was rebuilt into Keith’s Grand Theatre in 1908-1909, it was part of a project that included a major office building, originally called the Lemcke Annex and later the Consolidated Building. The original front of the Grand Opera House was demolished to make way for the Lemcke Annex. The project was designed by R. P. Daggett & Co., an architectural firm founded in 1868 by Robert Platt Daggett, who was probably the lead architect for the project, though his son, Robert Frost Daggett, Sr., was also a member of the firm by then.

The Grand Opera House reopened in the fall of 1909, though the rebuilding of the house was not completed until 1910. It appears that the B. F. Keith circuit did not take over operation of the Grand until that year, judging from this article in the September 4, 1910, issue of The Indianapolis Star:

“Unusual interest attaches to the opening of tho Grand Opera House for the new season, because of the fact that it is now under the management of B. F. Keith, the founder of modern vaudeville. It will hereafter be known as B. F. Keith’s Grand Opera House, and the season inaugurated with the Monday matinée will be the first that Indianapolis has had opportunity to enjoy the full benefits of the splendid organization that has made the Keith theaters the acknowledged home of the best to be found in vaudeville. Since the Grand closed when the wrecking of the street facade of the building was commenced, to make way for the new Lemcke Annex, many improvements have been made, the new lobby has been completed, and the patrons will suffer no discomfort from the building operations, which do not in any way Interfere with the theater proper, or the auditorium.”

A new article from Historic Indianapolis.

Here’s another Houdini curiosity (1907), showing Harry in Indianapolis standing in front of an ad for Pluto Water, a laxative natural water product bottled at the French Lick Springs in French Lick, Indiana.