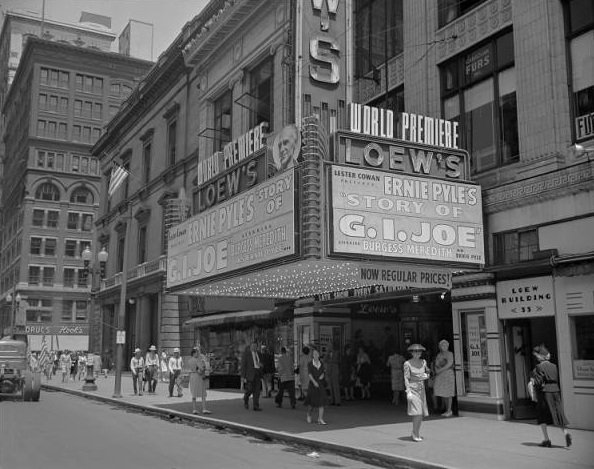 Opened on 14th February 1921 as Loew’s State Theatre. It was designed by architect Thomas Lamb, with architectural firm Rubush & Hunter acting as supervising architects. Seating was provided for 1,420 in the orchestra, 100 in the boxes, 108 in the loges and 920 in the balcony. It was equipped with a Moller 3 manual organ. It was remodelled to the plans of Leon Fleischman of architectural firm Lamb & Fleischman and re-named Loew’s Palace Theatre from 3rd March 1928. By 1941 it was known as Loew’s Theatre.

The excellent book ‘Indianapolis Theaters From A – Z’ by Gene Gladson (published 1976),names Thomas Lamb as architect with Rambush & Hunter as supervising architects.

Seating was provided for 1,420 in the orchestra, 100 in the twelve boxes, 108 in the loges across the front of the balcony and 920 in the balcony; giving a total seating capacity of 2,548. All chairs were comfortably designed and were uphostered in Spanish leather. The theatre was equipped with a Moller 3Manual theatre organ.

Press advertising in the 1950’s list it as Loew’s

AS in Warrens comment of 6/29/07. We had the LOEWS VENDOME in Nashville, Tennessee. But almost everyone just called it the LOEWS.Also the 1945 picture is nice but I did not see the theatre in it,maybe my eyes are going.

On second look ,I do see the theatre on the far right,hard to see though.

I worked as an Usher at the Loews when I was in High School ( mid 60’s). The place was played out then but still had some old glamour left. I saw In the Heat of the Night there about 100 times also You Only Live Twice many times . They still had two union stage hands who did next to nothing and a labryinth of dressing rooms etc from the vaudeville days. There was a full size cut out of Sophia Loren from Heller in Pink Tights in the ushers dressing room that I often wish I wouldve taken home!

kencmcintyre’s photo depicts the World Premiere engagement of THE STORY OF G.I. JOE in August 1945, just weeks after the end of World War II. Indianapolis’s own Ernie Pyle, the Pulitzer Prize-winning war correspondent, was killed in the final weeks of the war in Europe. His death came between the end of filming and the movie’s release. United Artists honored Pyle by opening the biopic starring Burgess Meredith and introducing Robert Mitchum in Pyle’s hometown. Great photo.

This theatre was conceptualized in 1917 with plans and construction beginning in 1919 as the Loew’s Indiana Theatre project. Loew would change the name to Loew’s State during construction which finished a year behind schedule. The circuit began a 99-year lease in 1919 finally opening Valentine’s Day, 1921 with a parade as the Loew’s State Theater. B.F. Keith took over the year-old theatre on September 20, 1922 on a sublease from Loew’s and the theater became the Palace Theatre just five days later (grand opening ad in photos).

Keith closed its Palace on July 30, 1927 as Keith moved its combination vaudeville/movies concept to a nearby theater. With the lease back in Loew’s control and 91 years remaining on its lease, it announced In December of 1927 that it would reopen the following March. Le6hich would become the Loew’s Palace on March 3, 1928.

Loew’s dropped “Palace” continuing as Loew’s Theater until urban development occurred all around it in the 1960s. Needing a new parking garage, the Loew’s site was purchased with the theater closing on April 12, 1970 with “What Do You Say to a Naked Lady.” Famed demolitionist Edward J. Zebrowski — the “Big Z” — was brought in to strip the building which he sold in a tag sale and, then, finally at an auction. The theater was torn down weeks later joining the parking garage brigade.

Looks like Loews owned the whole building at one time by the sign by the theatre entrance.