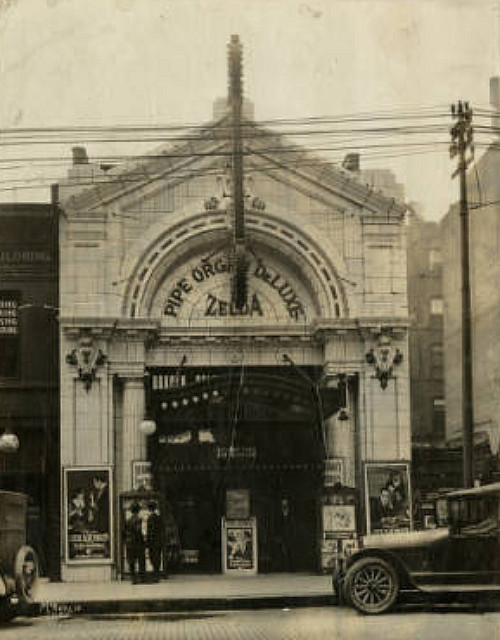 An early downtown Duluth cinema, the Zelda Theatre was opened in 1914. By 1926 it was operated by Finkelstein & Ruben.

I am wondering about the comment made by chuck1231 regarding who operated the Zelda Theatre and I am not aware of Finklestein Theatres.My grandfather,William Abrahamson built the theatre,it was named after one of his daughters named Zelda and he owned I believe 2 others.

The company, which dominated much of Minnesota in 1920s was F&R which stood for Finkelstein & Ruben.

I don’t know the source of Chuck’s information, but it probably dates from several years after the Zelda Theatre opened. A 1926 issue of The Film Daily made a reference to “…the late Bill Abrahamson at the Zelda, Duluth….” so F&R probably took over the house after he died; although another Film Daily item from 1926 mentioned a Gus Carlson as operator of the Zelda. He could have been an independent operator, or a manager for F&R.

I’ve found a couple of other mentions of W. M. Abrahamson in publications from the 1910s. A biennial report of the Minnesota treasurer’s office said that the office had received a fifty dollar incorporation fee from the W. M. Abrahamson Theater Co. on February 17, 1913. The 1913-1914 edition of Julius Cahn’s Official Theatrical Guide listed a 1200-seat, ground floor vaudeville and picture theater in Duluth called the Empress, with W. M. Abrahamson as manager.

This web page about Duluth’s smaller movie theaters gives the years of operation of the Zelda Theatre as 1920-1929.

The Zelda Theatre was in operation before 1920. The May 8, 1914, issue of the Duluth Evening Herald mentions a theft of a plumber’s tools “… from a chest in the new Zelda theater building, 309 West Superior street.” The item doesn’t say whether the theater was still under construction or the plumber was doing repairs. The house was surely open before the end of 1914, though.

Also, the Zelda Theatre has not been demolished. Since 1985, the much-altered building has been the location of the Peterson Anderson flower shop.

The address is one number off, but this item in the December 27, 1913, issue of The Construction News is surely about the Zelda Theatre:

Wangenstein & Giliuson (John J. Wangenstein and Ephraim C. Giliuson) also designed the Lyric Theatre, which opened in the next block of Superior Street in 1914 as the New Grand Theatre.