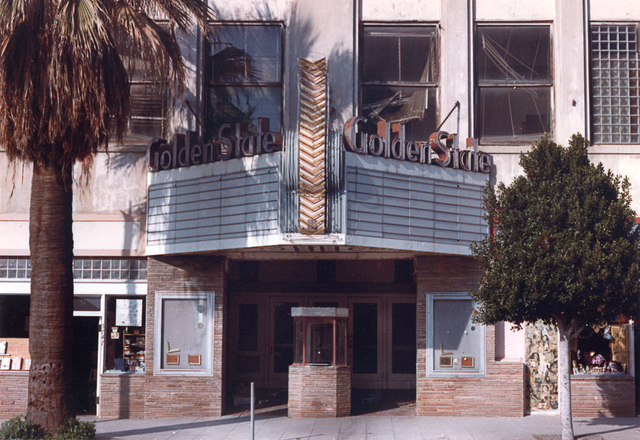 Originally opened in January 1890 as the Loring Opera House. Stars such as Sarah Bernhardt and W.C. Fields performed on its stage.

It was remodeled by architect Welmar Lamar, reopening as the Golden State Theatre on October 15, 1928 with Al Jolson in “The Singing Fool”. It was operated by Fox West Coast Theatres.

It was closed in January 1973, and stood unoccupied until the empty building was gutted by a mysterious fire (possibly arson due to the high cost of renovation?) on the evening of October 11, 1990. City officials then approved plans to demolish the remains of the building.

Advertised as the Loring Theater in the LA Times in 1924.

I have to go out there tomorrow, but since the theater is now a parking lot, no need for any photos. Too bad.

I would like to have seen this theater when it was still standing. It’s a pity that more effort is not made to reuse the buildings instead of demolishing them.

I worked at the Golden State Theatre as an assistant manager in the early sixties. It was a wonderful old theatre, considered to be a B level or “move over” theatre from the Fox Riverside. Once in awhile, The Fox would hold a film several additional weeks if the seats were needed. This is how, we got to open “Dr. No” first run and pack the house for weeks.

Some of the odd memories were the wooden floors. The theatre had wooden floors and it was difficult for patrons to quietly leave their seats for a smoke.

Another memory was the extraordinary keystone angle of the balcony. Being first a legit theatre, the balcony was steep and intimate to the stage. Heaven help you on a change of program and as an employee you carried the film cans up through the balcony. If they ever got away from you, they wouldn’t stop until they hit the main floor.

Sometimes on a morning, I would take the box of keys that had long ago lost their name tags and would explore all the rooms in the theatre building. It took a great deal of patience but over time, I managed to open doors closed for decades. It was a wonderful time.

I was sad to learn of the fire. I don’t think anyone really appreciated the theatre for it was always in the shadow of the Fox, but any of us that worked there loved it as a very special place, not to be duplicated…ever again.

RIVERSIDE, June 15-Saving them the disgrace of terms in San Quentin by granting probation, Superior Judge Morton yesterday refused to turn loose without punishment two of the three boys who staged the bold Golden State Theater safe robbery, and sentenced them to serve terms of six months at the junior division of the county prison camp in the San Jacinto mountains.

The three boys gained entrance to the Seventh Street theater building through a balcony door, wheeled the safe to a side fire exit and onto a platform. They were frightened away by a door opening in a nearby restaurant, but returned forty five minutes later, toppled the safe into a car they had stolen, and drove away.

The safe was left in the car on a lonely West Riverside quarry road. There it was discovered about eight hours later by officials of the theater who started out in search of the strong box and became suspicious upon seeing the three boys returning from West Riverside.

Fearing they were suspected, the three fled to Arizona. The third youth got off the freight train to get a drink and was left behind. Pricking consciences sent the other two back to their homes.

Interesting article, ken mc, even though it’s from 1930. Thanks for that, and the expanded photograph of the Golden State Theatre.

Riverside seems to have improved in the ten years since I first went there, at least in the downtown area. We had lunch in the old fruit company building that is now the Spaghetti Factory. Once the Fox is a performing arts center, I think you will see some real gentrification in that area. It was pretty shabby looking in the late 1990s, like Old Town Pasadena was in the early to mid 1980s.

I have a great picture of my mother in the late 1940’s in the ticket booth. She worked at the Golden State theater from about age 16 to probably age 20+. She worked in the ticket booth and also as a bookeeper. She loved that job and the people that owned it then for giving her a job when needed and the belief of her abilities. My mom, now in 2011 age 83, is still married to the young fighter pilot stationed at Victorville!! I wish I had known it was demolished in 1990. I would love to give her some memorabilia. I will try to scan the photo to post of her in the theater booth… she looked like a starlette herself!!

I have a fun little story about the Golden State and the movie Cinema Paradiso, which I’ve posted on my movie blog: https://markkadams.wordpress.com/2015/02/03/italian-essentials-cinema-paradiso/