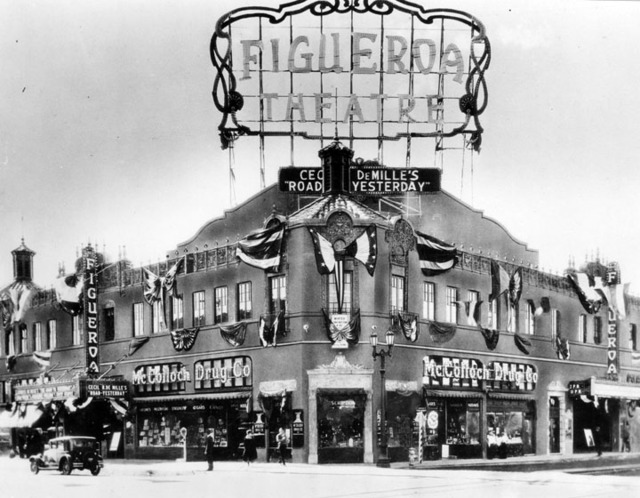 The Figueroa Theatre opened November 13, 1925 with the world premiere of Cecil B. DeMille’s “The Road to Yesterday” starring Joseph Schildkraut. It was built for and operated by Fred Miller and the L. Lou Bard chain Far West Theatres Inc. and was located at S. Figueroa Street and Santa Barbara Avenue (now known as W. Martin Luther King Jr. Boulevard) with entrances on both streets. It was equipped with a Wurlitzer theatre pipe organ. It was later taken over by Fox West Coast Theatres.

The Fox Figueroa Theatre was razed in the late-1960’s, along with its large roof top sign and now on the site is housing. The former theatre’s location is directly across the street from the Los Angeles Memorial Sports Arena.

The theater address was 4011 S. Figueroa, and Martin Luther King Jr. Blvd was called Santa Barbara Ave back then.

Growing up this was one of the local theaters within walking distance of my house, and the nicest theater in the area. Awesome architecture and it had a balcony which was unusual for a neighborhood theater. I saw “Visit To A Small Planet” with Jerry Lewis there when it opened, along with the “Curse Of Frankenstein” and many others..

The gas station is across the street from where the theater was, the location now is occupied by housing. The picture is before they built the Sports Arena. My buddy and I used to play in the construction site, riding our bikes through doing hook slides and jumps.

In Google’s satellite and street views it is the Broadway Federal Bank that is on the site of the Figueroa Theatre, with a large housing complex just west of it along MLK Jr. Blvd and another housing complex to the south across 40th Place.

A couple of times in the 1950s when we were on our way to visit my grandparents, who lived on 99th Street west of Normandie, we drove past the Figueroa Theatre about the time the house was opening for a Saturday or Sunday matinée, and there would be a huge crowd waiting in the line for the box office. It must have been a very popular theater in those days.

Yeah, the bank has been there awhile and is the cornerstone for the housing complexes around it. The Figueroa was such a great theater, and I have so many found memories of those Sunday Afternoons only a 15 minute walk from home after church. It made life really easy for a kid when the only other alternative for a theater of this quality was downtown L.A. Although the “Academy Theater” in Inglewood was a pretty nice house as well, for a kid that was just as far away as downtown.

docchapel: Did you ever attend the Regent Theatre on Vermont near 40th Place? We have a page for it, but nobody familiar with the theater has ever shown up to comment on it, so we know next to nothing about it. It might have closed sometime in the 1950s. I don’t remember ever having seen it myself.

Yes I did. That was my second favorite neighborhood theater. Down the street from Manual Arts High.

I am unable to find the page for the Regent. I would definitely comment. 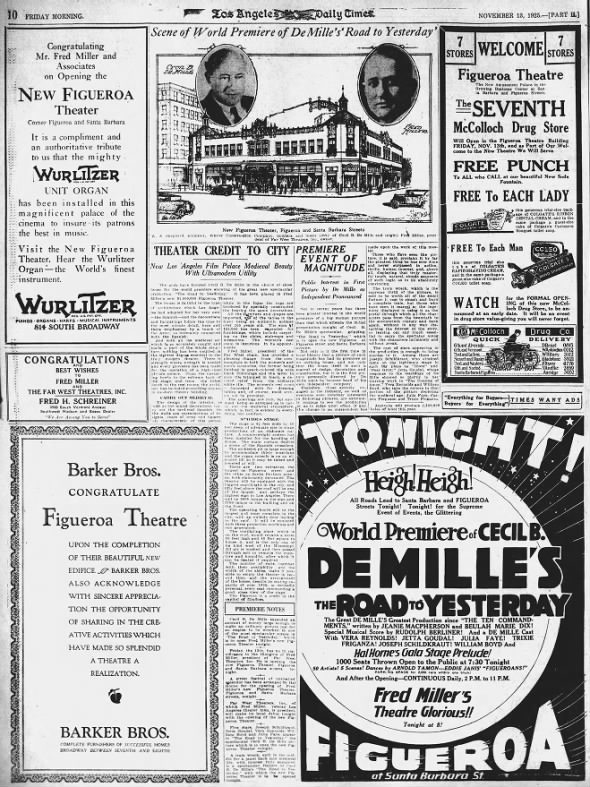 Well, time marches on and the Los Angeles Memorial Sports Arena that was formerly across the street from the Figueroa Theater is no longer and has been replaced by Banc of California Stadium, home of Major League Soccer’s Los Angeles FC which opened in 2018.