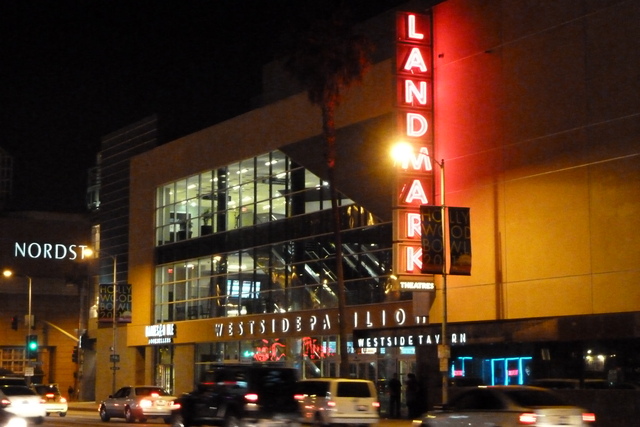 This theatre replaced the aging four-screen Landmark theatre in the adjoining Westside Pavilion.

IMO, runs neck in neck with Regal’s LA Live complex as the most overrated theatre in Los Angeles. It’s constantly patroned by stuffy, pretentious West LA types who prefer subtitles and corsets to explosions and VFX. Shortly after opening (as Brad mentioned), they got delusions of grandeur and started mixing big titles like the last 007 flick, “Inception” and the aforementioned “The Dark Knight” alongside their stuffy arthouse fare on their postage stamp sized screens.

I used to only come here during Academy Awards season but, since they now run the 10 Best Picture nominees at other theatres, I happily avoid this joint like the plague!

Personally, I have never had a reason to patronize the Landmark 12 since I live minutes away from Arclight Hollywood. To me it is trying to be a Westside variation of Arclight. One day I had to wait around in the area and almost bought a ticket. The movie I wanted to see was in the lounge screen with sofas which I’d rather not sit in, so I passed. To see something like Inception there is silly to me when you have the Village up the street. But people do not care which is why the big palaces are dying slowly.

One of my film club friends spoke with some folks from another film club who saw Inception here. They said they hated the movie. My friend told them, “It’s because you saw it here instead of The Dome.” LOL!

A film like Inception needs to be seen at the Dome, Village or Chinese. There is something special still about seeing a large scale film on a large screen.

Which is why I called The Landmark’s (UNNECESSARY!) booking of large scale releases “delusions of grandeur.” The place was built and conceived as an arthouse. Showing mainstream flicks here is a waste of time!

It’s no Arclight, but the theater is passable. Glad they’ve kept the art house focus from when it was a 4 screen hole-in-the-wall in the corner of the mall.

I will say that the service is excellent. There was an online screw up and my tickets weren’t in the system, even though I was charged for them. I bought an extra pair at the kiosk because we were already there and the movie was about to start. (Concierge line was too long to bother with.) I sent them an email about it the next day, assuming that they’d just shrug, but was promptly refunded for the missing tickets.

Okay, so after 5 years I decided to make a visit to The Landmark yesterday. I wanted to see Polisse and this was my only theatre choice. Overall, the service was good and the theatres look nice. I’m still going to say Arclight Hollywood is a stronger venue. The Landmark’s screens are way too close to the seating; Arclight Hollywood has more space between 1st row and the screens and overall has better sightlines. For the film I saw the Landmark was sufficient. But I do not see me going there unless totally necessary.

The big houses (5 or 6 of them) are really pretty good. The rest are crummy shoe-boxes.

I did appreciate it was still film being projected. It reminded me a bit of the Sunset 5 more than Arclight.