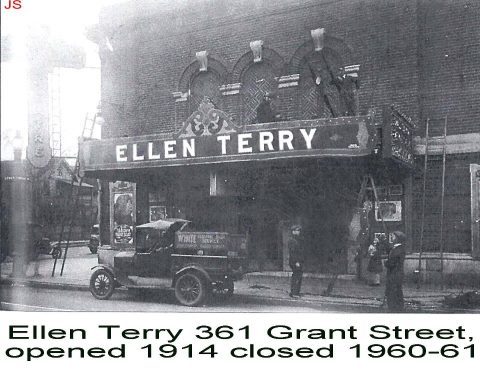 The Ellen Terry Theatre was named after the English stage actress who was born in 1847 and died in 1928. It was opened as a legitimate theatre on November 23, 1914. It originally had 1,200 seats. By 1926 it was operating as a movie theatre.

The Ellen Terry Theatre was closed as a movie theatre July 2, 1961. It went back to presenting live theatre intermittently and was demolished in August 2001.

It’s just a guess. John Gielgud was her nephew, I think.

I think this theater was last used in the late 80’s for plays.

As far as I have been able to learn this theatre was indeed named after the actress Ellen Terry. It was being used intermittently as a church in it’s last years with the name of the church on the marquee, but in the photo posted by Lost Memory on Jul 13 it has been painted over. Demolition must have been within the last few years because the building was still standing when I lived in Buffalo.

This theater and the Marlowe Theater were financed by a group headed by John Oishei. By
1920 the ownership, along with 4 other Buffalo theaters was General Theaters, a group
which crashed in 1923. Through most of it’s later years, it was run by A C Behling, who
also ran the Sylvia Theater in Buffalo.

This theatre advertised as a speciality matinees on Saturdays, Sundays and Holidays. Phone number 1960: LIncoln 5959

when I was growing up on the west side of Buffalo in the 50’s, I used to go to the Ellen Terry every Sat & Sun. My parents told me the owner namd the theatre after his two daughters, probably neighborhood folklore. It was a great little theatre n a then beautiful neighborhood

I remember this place because my friend Jimmy the Clam ran it in the early 90s. I remember he booked Boston cult rockstar Jonathon Richman in October of 91 in what was a great show. Richman spent most of his time during breaks in the concert watching the World Series between the Braves and Twins on a tiny plug in over the air TV in a room off the balcony. The theater later held odd stage productions with names like Psycho Beach Party before the place was knocked down. The curtains from the theater now hang at Mohawk Place in downtown Buffalo.

In the 1960’s, I remember as a child attending Coronation School on Dewitt St. we use to hold our Christmas plays/productions at this place.

greg33770, I remember the same thing. Coronation and the Ellen Terry.