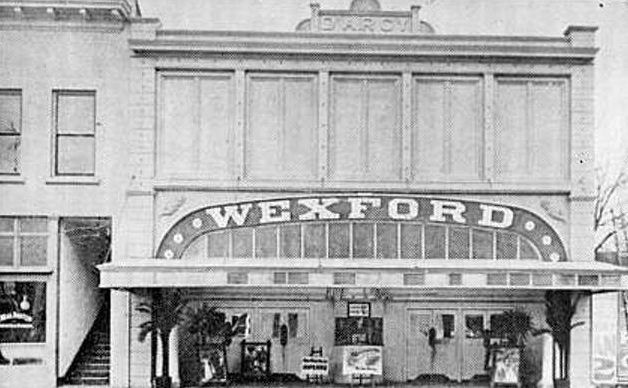 This is now a retail vacuum store. I wanted to look around but I ran out of time while in Salem last week.

Was this also known as the Grand Theatre?

Salem History changed all its URL’s. The photo of the Wexford Theatre is now at this link. The caption gives the theater’s known period of operation as 1911-1915, but this web page says that the building was probably built in 1909, and that it had been altered into a retail store by 1926.

The building now at this address might or might not have housed a theater. Here is an item from the February 5, 1916, issue of The Motion Picture World tells a different story:

“Judge P. H. D'Arcy, who owns two pieces of theater property in Salem, Ore., is erecting another theater on Court street, on the site of the Wexford theater, recently burned. The building will be 100 by 120 In size, and part of it will be occupied by stores. The auditorium will seat 800 and Judge D'Arcy intends to make the house the finest picture theater in the valley.”

A few weeks later, on February 19 MPW reported that George Bligh had taken over operation of all the movie theaters in Salem, so it’s possible that Mr. D'Arcy had decided to leave the theater business altogether, and rebuilt the D'Arcy Building without a theater in it. I’ve found no references to the Wexford Theatre after the 1916 item, so it’s possible that the Wexford’s career ended with the fire in late 1915 or early 1916.

I just found an performance announcement for my great grandfather, Noel Lester, in the Feb. 10 1914 Daily Capital Journal. He played one magic show in the Wexford. This is the earliest performance date I have found.

Grand Opening for the 450-seat Wexford Theatre was May 25, 1910 managed by Harry Moyer and built by Judge P.H. Darcy. The theater is on financially ailing and a management change in January of 1915 was followed by a brief closure in October of 1915 as the theater awaits new management. In November, the Wexford re-opens very briefly with new management under E.K. Dennison. The last advertised show is November 13, 1915. Just three weeks later a fire on Dec. 7, 1915 destroys the financially-doomed and now fire-doomed theater. Darcy rebuilt the property for Greer & Kreuger Furniture though calling the new building, The Wexford Building.