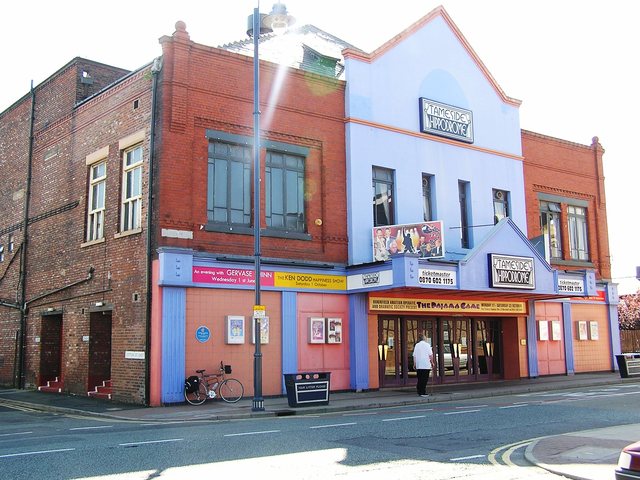 Originally opened on 21st November 1904 as a music hall theatre for the Broadhead’s Theatres chain. Films were screened as part of the opening programme. The Empire-Hippodrome Theatre’s auditorium was completely gutted in 1933 and the present stalls, plus single balcony, Art Deco style interior was constructed. This replaced the previous two balconies plus box arrangement. The exterior was largely unchanged.

The architects responsible for the present auditorium are Drury and Gomersall, the exterior and original were by J.J. Alley.

It reopened as the New Empire Cinema on November 4th, 1933 and was equipped with a Compton 3 manual, 6 ranks organ, which had an illuminated surround. It was taken over by Union Cinemas in 1937 and then by Associated British Cinemas(ABC) - however it was not renamed ABC until 1963. In 1964 the council took over the building and the Compton organ was removed.

Now open for live performances only, it was owned by Apollo/ SFX/Clear Channel and was last operated by Live Nation.

More pictures of the Hippodrome / ABC can be found here:–

As the theatre prepares to go dark and get boarded up, due to failure of the Council to appoint a new management company, these pictures were taken in March 2008. 42nd Street, by the local amateur operatic society is playing to good business – but will the show go on for the theatre?

In early 2012 the newly-formed Tameside Heritage and Arts Trust approached the Council with proposals to re-open the theatre as a full receiving theatre with film and digital video capability. The Council accepted the proposals in principle and work is in hand to re-open in 2013.

Does anyone have any more information on the local Cinemas? I believe there were a few, The Star, The Pavillion, The Gaumont and maybe another one or two. The reason I ask is that I know my Great Grand Uncle, Joseph (Joe) Elliott and his wife Amanda (Am) used to run one. My dad thinks it was The Star or Bug Pit as it was affectionately known. I’m not a 100% that it was that cinema but I was hoping that someone on here would have some information. Joe Elliott was born in Dukinfield and lived in and around the Ashton area. I remember my Granddad telling me stories of how the kids used to drop ice creams off the top balcony onto his head. Apparently he always dressed very smartly in a shirt and tails. Any info would be very welcome!

Worked here as relief manager for a number of months in 1969. Broke the house box office record (like a lot did) with ‘Till Death Us Do Part’ and still have the congratulatory letter from the MD. R.A.Webster. Happy Days!

Hi Ash, The Star cinema was on Church Street which ran parallel to Stamford Street. It closed in 1947 and was demolished in the early 60s. The last film was Judy Garland and Fred Astaire in “Ziegfeld Follies” The archive centre at Ashton Library has photos and may have information on the management.