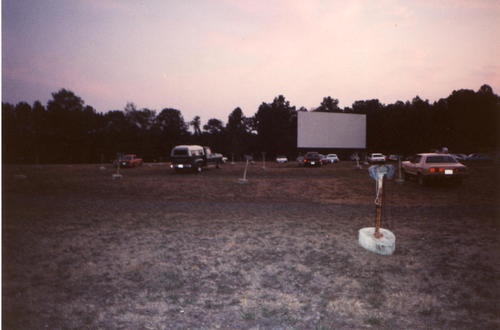 The Sunset Drive-In was opened prior to 1952, when it was operated by Colonial Theatres. A family-owned business with family entertainment in mind. The Sunset Drive-In has been a fun family tradition for several generations in the Shelby, NC area.

Open Friday, Saturday and Sunday offering an inexpensive night out for the whole family to get together and watch two movies for only $7 a car load. We can hold about 420 cars. Come early for good parking. Bring chairs and blankets to watch the movies under the stars or just sit in your car. Visit the staff inside the snack bar and pig out on our great burgers, hot dogs,corn dogs, chilli cheese fries, french fries, popcorn, drinks and candy. Come early and play frisbee or toss the ball around with the kids in the grassy area in front of the screen.

Come join our “drive-in family” and make “us” a part of yours. Carry on the tradition to the next gerneration.

Contributed by Sunset Drive In Theater
Get Movie Tickets & Showtimes

LM: Great photo of this drive-in that I didn’t get to see in my travels to Shelby last week.

Didn’t notice that you had posted this drive-in photo almost a year ago prior to my recent follow-up post. We’re thinking along the same lines…only several months apart!

Here is another photo:
http://tinyurl.com/ylcbdmr

I am working on a research project for school on Drive-In Movie Theaters in NC! Any informaton that anyone has would be greatly apreciated! Thanks!

What time do the movies start?

The Sunset was one of the five drive-ins in the state of North Carolina that upgraded to digital projection.

The 1952-63 Motion Picture Almanacs listed the Sunset in Swainsville and owned by Colonial Theatres Inc., capacity 300. The MPA said that in 1953 it was the first drive-in for the small chain, based in Valdese NC, then run by general manager G. D. Carpenter. It wasn’t listed in the 1966-69 editions, but returned in Shelby for the 1972-76 editions.

Modern accounts say that Rick Stinnett, whose family built and ran the Bessemer City Kings Mountain Drive-In until it closed after the 2014 season, bought the Sunset in 1985. He spent $100,000 to remodel and convert the projection room in early 2014.