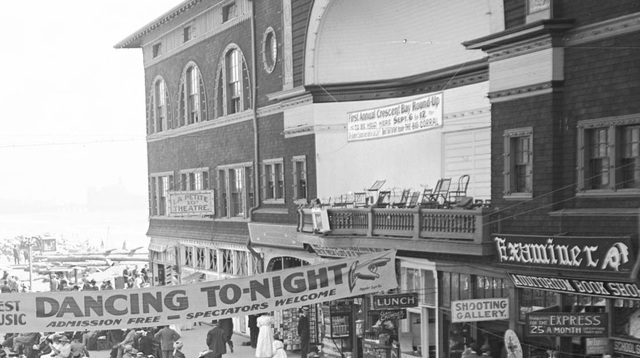 Another early beach front cinema which operated in the Ocean Beach district of Santa Monica from 1915 until before 1923.

Either La Petite Theatre was a bit peripatetic, or the area had two theatres by that name.

The earliest reference to Santa Monica’s La Petite Theatre in the L.A. library’s California Index is to a Santa Monica Outlook item of January 1, 1908, announcing the opening of a new play. An Outlook item of January 6 that year gives the theatre’s address as 227 3rd Street. The following day the same paper announced a film titled “College Chums” would appear at the La Petite Theatre.

But on January 25, 1909, The Outlook announced that B.A. Wheelock would finance the construction of the La Petit [sic] Theatre in Ocean Park. The announcement that the contract for construction had been let was published in The Outlook on February 16, 1909. The architect of this building (which may have had a very brief existence) was Alfred Rosenheim. A mere three years later, on February 12, 1912, The Venice Vanguard carried an article announcing that Kramer and Stineman had purchased the La Petite Theatre, Ocean Front and Marine St. from Wheelock & Boland, and planned to build a larger building on the site. I’ve been unable to confirm that the plan to rebuild was carried out.

Whether in a new building or the earlier one, the La Petite may have operated into 1923. A Venice Vanguard article of February 17, 1923, said that the La Petite Theatre building would be converted into a store.

The LA Times reported on September 17, 1908 that the La Petite Theater on Third Street had been sold by Gatty Jones to A.P. Tugwell.