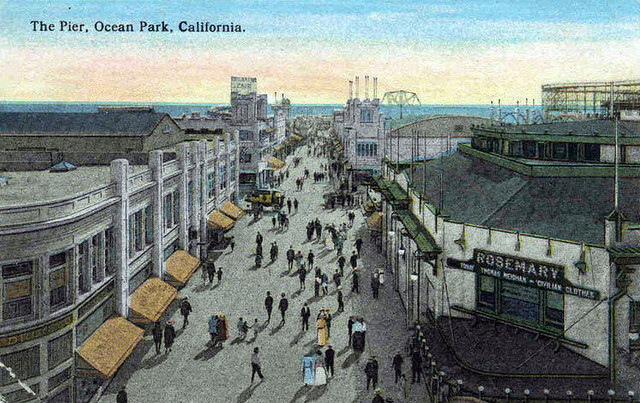 Located on Ocean Front Walk between Navy Street and Marine Street, in front of Pacific Ocean Park Pier. The original Rosemary Theatre was destroyed by fire in 1924. It was rebuilt by the Raymond Amusement Company and reopened on February 4, 1925 with a seating capacity of 1,454. Later taken over by West Coast Theatres, soon to become Fox West Coast Theatres. This theatre, along with the Fox Dome Theatre next door has been lost since the 1950’s.

The theatre was gutted in the 1950’s and the buildings were finally lost when the pier burned down in 1977.

That’s kind of funny the caption “Exterior view of a Warner Brothers theater in Hollywood, 1931”. When you go into details for the picture it shows the Warner Western Theatre @ Wilshire and Western Ave., later known as the Warner’s Wiltern Theatre.

Here is an undated photo:
http://tinyurl.com/3abz9j

Was this the theatre that had the Magic Carpet ride when it was Pacific Ocean Park in the 60’s ? I seems to me that a old movie theatre had this ride in it. The Flight To Mars ride was my favorite. What a great park this was. I even think it was owned by the Fox West Coast people National General Corp just like in San Francisco they got money hungry in the 60’s and tore down the SF Fox Theatre and built a apt building on the spot. Good thing they didn’t own the land under the Graumans Chinese that they ran as a Fox West Coast Theatre the NGC folks lost money on not being able to sell this house and add it to the destruction they did to the other fine theatres they owned. I still have a popcorn box from the Fox West Coast Theatres a NGC Co The Place To GO! A place to go no more.

This theatre is clearly seen in the 1950 film “Quicksand” starring Mickey Rooney (perhaps his finest performance ever) and Peter Lorre -
www.amazon.com/Quicksand-Barbara-Bates/dp/6304680813

To Terry Wade – just seeing your post now – the Magic Carpet ride was housed in the old Dome Theater, not the Rosemary. My grandparents lived right across the street from what became the entrance to POP (Neptune’s Kingdom) at the Hotel St. Regis. Flight To Mars was my favorite ride as well, and, in fact, an artist’s rendition of it adorns the cover of my second novel, Kritzerland (you can see the cover at amazon.com).

I have only just noticed that the L.A. Library’s photo of the Dome Theatre (featured in reduced size at the top of Cinema Treasures' Fox Dome Theatre page shows the marquee of the Rosemary Theatre, but above the marquee is the name Dome Orpheum, using the Orpheum Vaudeville Circuit’s standard script lettering. The Fox Rosemary must have had Orpheum Vaudeville in its early days. In any case, Dome Orpheum Theatre might have been an aka for the place around the mid-late 1920s. Can anybody dig up a period newspaper ad or something to confirm this?

The Los Angeles Public Library gives the date of this photo of the Rosemary Theatre’s proscenium during demolition as 1970.