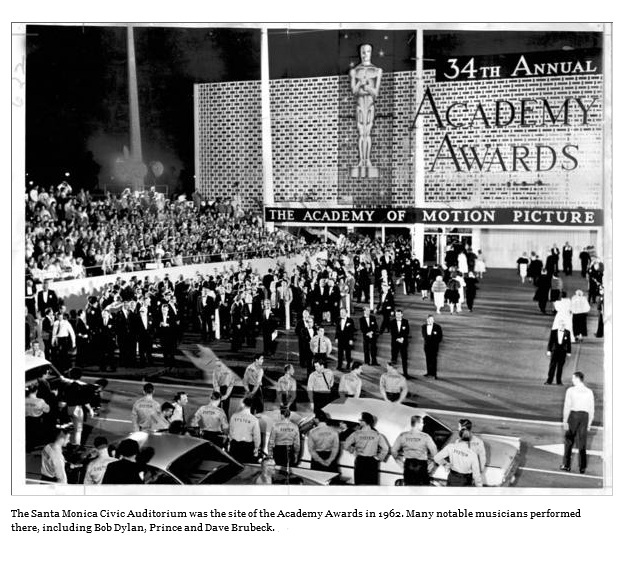 The Santa Monica Civic Auditorium is owned and operated by the City of Santa Monica. It was designed by Welton Becket, who designed many iconic buildings in the Los Angeles area, including the Capitol Records Building, the Pan Pacific Auditorium, and the LA Music Center. The auditorium opened June 15, 1958 as a multi-purpose venue for community events.

The faciliy is unique in that its concrete floor is mounted on hydraulic lifts, making it possible to change the rake of the seating area. This makes the facility adaptable to both traditional theatrical seating and to flat floor exhibit shows. It was the site of several Academy Awards Ceremonies in the 1960’s.

Many Southern Californians of a certain age remember the hall for the surf movies shown there for over a decade. Only two blocks from the beach, the films attracted surfing afficianados who stood in line at the box office, sand still clinging to their clothes. The hall is also famous for its role during the early rock and roll years as the main Southern California venue for concerts of virtually all the famous bands.

Here’s a link that includes a poster:

They would 4-wall the Civic Auditorium also for the Warren Miller Ski films from time to time.

The auditorium is in danger of being demoed. The city doesn’t have the funds to update/improve it.

I thought Nederlander, the people who own the Pantages were thinking of taking it over?