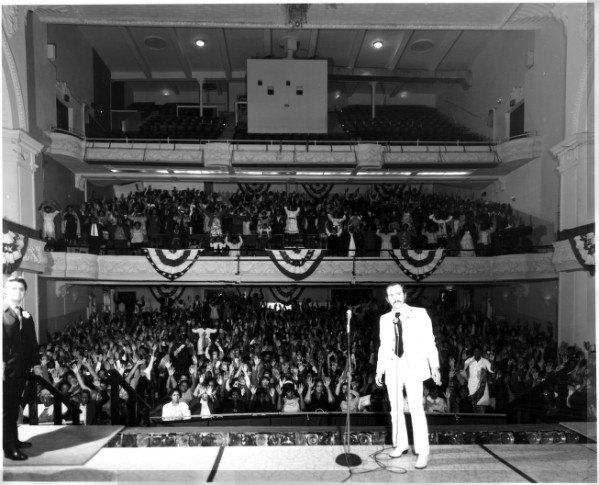 The Shubert Theatre was built in 1906 for legitimate theatre, it underwent a number of name changes until it became the Civic Theatre in 1951. I was never inside, but it always looked to me to have been one of those alley-jumper theatre’s where the entrance is on a main street but the auditorium was built across from the building housing the entrance, connected to it by a tunnel or bridgeway.

It apparently closed in the late-1960’s and sat vacant for many years, and by the late-1970’s it had been converted into a discotheque. In 2004 there were plans to convert into loft/warehouse units, but this never happened, and only the front of the building was converted. It again operates as a live theatre, with entry at the rear of the building, and its vertical sign has been restored.

Here’s a picture of the Civic showing West Side Story:
View link

Here is a December 2008 article about landmark designation:
http://tinyurl.com/a2dc2p

From the google street view, the auditorium building has no windows punched into the sides – perhaps some of the original interior still exists?

The theatre was originally named The Shubert, planned by the New York Shubert Brothers as the New Orleans branch of their nationwide chain of legitimate theatre outlets. Built by Equitable Real Estate Corporation, headed by Emilien Perrin, Sr. When the Shuberts decided to close it, Perrin took it over, renamed it The Lafayette, updated it with new moving picture equipment, projectors and screen. It was built in the then popular arcade style, with a covered walkway in between two retail stores facing Baronne Street, into the auditorium. The name was changed a number of times, from Lafayette to Star, to Poche, then finally to Civic.

Civic theatre is alive and well. It has not been turned into condos and you may be very well surprised to know it is more alive than you ever believed…..

This was actually a disco in 1979. We went on a senior trip to New Orleans and went here to eat and dance. I have a picture.

Happy News about the Civic….. although a 2004 Times Picayune article talked about the condo conversion or apartment conversion of the theater —– it NEVER HAPPENED!!! The theater is alive and well and I attended a play there last night! Many of the original architectural details are in place, in a bright white auditorium with a beautiful chandelier. The original entrance is taken over by the apartment building next door so you enter from the back, but the theater is ALIVE AND WELL!!!! Hurray! www.civicnola.com

This is from Forbes

The above article (Forbes) has some nice interior photos both pre and post renovation. Nicely restored. It’s all white inside, but from some of the photos it appears that has been the color scheme for many years.