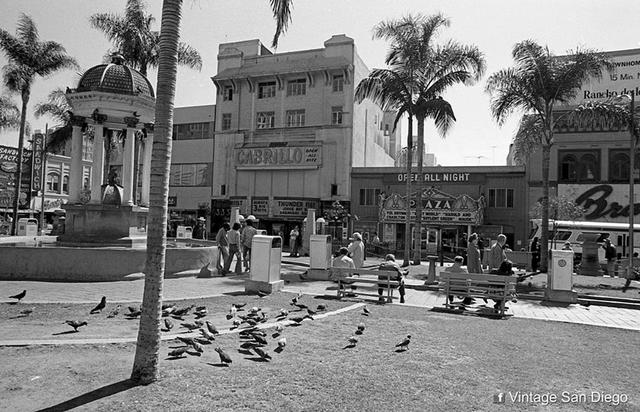 Originally opened March 1, 1915, the Cabrillo Theater was located on the South side of Horton Paza. In the early-1970’s it was operated by Pussycat Theatres, who also operated the adjacent Plaza Theatre. It was demolished in 1982 to make way for the new Horton Plaza.

I learned to run the booth in this house in November of 1972 and stayed in the business ‘til December of 2000. It was then leased by Walnut Properties/Pussycat Theatres who held it 'til it was closed and demolished for the new Horton Plaza (they also had the Plaza Theatre which was immediately next door and, I believe, was earlier called the Owl). In 1972 they were running it as a grindhouse; three featrues that changed twice a week for .99 cents admission. It opened at 9:30A and ran 'til 5:30A. The janitors had four hours to clean the place and then it was back on screen. They later changed to first and second run movies with two features and the operating hours changed from 'noon to 5:00A and then 'noon to midnight. The projector heads were the original Simplex XL (with pure white interior and black crinkle finish), the sound heads were RCA MI-9030, the lamphouses were Peerless Magnarc, the rectifiers were McColpin-Christie selenium stack types, the sound system was a tube-driven RCA PG-230, the splicer was a Griswold R-2, the rewinder was a Golde and there was a Clint Phare cue scriber. This was a house which I was lucky enough to be able to explore from roof to basement (the Balboa, just down the street, was another). Though they’re cut off in the old photos, there were three floors of offices above the theatre. There was an old Civil Defense room in the basement which still had some ancient Civil Defense rations in it (biscuit, anyone?). There were boxes and boxes of stills and one-sheets going back who knew how far. The booth ran the classic way with the 2000’ reel changeover system ‘til we installed Xetron Maxi-7 automation and Christie xenon lamphouses some time in 1979 or 1980, and then it ran with 6000’ reels and changed over and did the show start/end cycles automatically. That beautiful arch seen in those old photos was covered up by the time I came along, but you could still see remnants of it if you climed through a crawl space found in the ceiling of a storeroom outside the office and across from the men’s room. There was an old fuse box in the basement marked “organ feeder”, but I’ve never found any mention of an organ being installed in this house. This theatre taught me my trade and I’ve never forgotten it.

The San Diego Reader has compiled all its articles about former Cabrillo operators Walnut Properties onto one webpage, along with around 100 graphics and photos that never appeared in ANY of the published versions. Also included is a Pussycat Theatre mini-history, updates on various Walnut-related lawsuits, etc, as well as a bunch of vintage Cabrillo newspaper ads.

This is supposed to be the Cabrillo in San Diego, around 1938, but I have my doubts as it doesn’t resemble the other photos:
http://tinyurl.com/cyfv56

Here is another 1981 photo:
http://tinyurl.com/qmgwsx

Even though it’s been gone for 28 years, it’s still stange to me that what was once Plaza Street is now a sidewalk. Just as a bit of useless trivia, Plaza Street, in the early ‘70s, was a one-way street going east to west (4th to 3rd). It was later reversed to make circling the Plaza a bit more difficult. As I say, useless trivia to any who weren’t there then.

Walter S. Keller was the architect of the Cabrillo Theatre, according to Southwest Contractor & Manufacturer of November 7, 1914. The construction permit had just been issued to contractors Armstrong & Peffley. Loupy & Pignot were the owners of the project.

Keller was also the architect of the adjacent Plaza Theatre, according to his page at ArchitectDB.