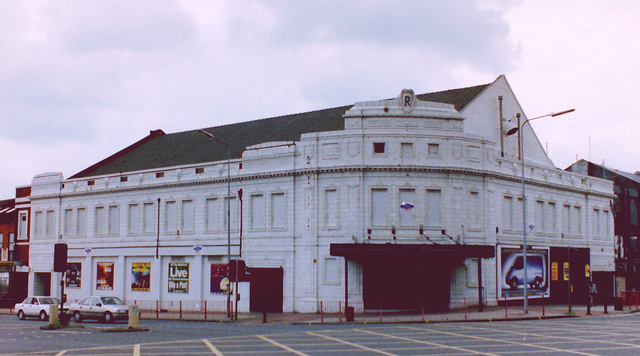 Located in the Higher Broughton district of Salford, in the north of Greater Manchester. The New Rialto Cinema was opened on 24th October 1927. A large building on a commanding corner site, it contained a 1,400-seat cinema (with all seating on a single floor), nine shops, a billiard hall and a dance hall. It could be said to have been one of the earliest examples of an entertainment centre.

The front was clad in cream terra-cotta tiles. An interesting architectural feature was two cherubs and a cello carved in red terra cotta above one of the exit doors.

Officially opened on Monday 7th November 1927, the New Rialto Cinema was taken over by the Associated British Cinemas(ABC) chain on 28th December 1931. It continued with film and stage shows until the outbreak of World War Two when it closed for a short period. Like most cinemas it reopened quite quickly as it was felt by the authorities that it was a good way to keep people off the streets during the black-outs.

Re-named Rialto Super Cinema, it was re-named ABC in 1965 and remained a cinema until 3rd February 1973 when it was converted into the inevitable bingo hall.

The bingo ceased in around 1999, and there was talk of opening it up as a dance hall. The former dance hall had become a discotheque.

The building was purchased to be converted into a dance hall, but there was found to be a major drainage and sewage problem that was going to cost a lot of money to put right.

One day the empty building mysteriously burned down. A McDonald’s restaurant and drive-thru now occupies the site.

Photo of the Rialto here:–

In 1968, the manager was Dave Keats who, at various times of day, used to frequent a nearby pub called ‘The Post Office’.

If the District Manager phoned the cinema during one of Dave’s absences, the staff would always say “He’s at the Post Office”.

I was the last ever Manager of this cinema when it closed in 1973. We held an after the show staff party in the foyer area on the last night. It was a sad night but a great party. I spent the next two weeks clearing and transfering stocks etc to other sites before the final boarding-up process. Following this I went on relief duties to other ABC Cinemas in the area.

Looking at the List of McDonalds in Manchester area, I found McDonalds Rialto. Naturally it is disappointing to find the cinema has gone, but the name lives on!

Children in Broughton had a wide choice of entertainment! I refer to the advert for the ‘X’ Certificated ‘The Flesh is Weak’ in the photos section……