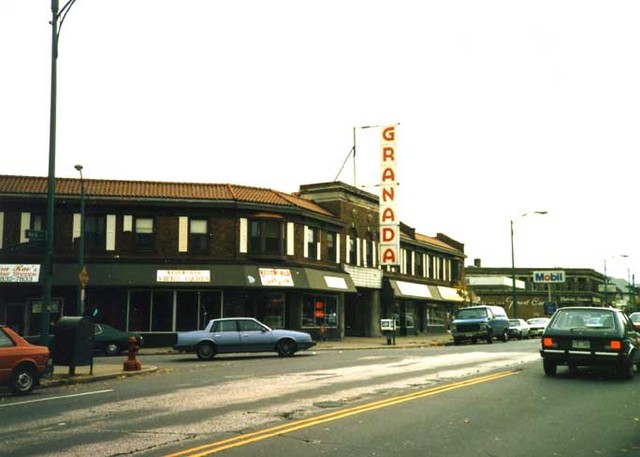 This very large elegant movie theatre in downtown Buffalo, NY was in opened by 1928. It was operated by the Schine Circuit for many years.

“The Rocky Horror Picture Show” was featured regularly in its programming at one time. After closing around 1982, the auditorium was later torn down and a gas station now occupies that parcel of land. The facade and lobby were retained and are in use as a pizzeria.

Below is an email comment about the Granada that a friend in Buffalo sent to me:

“The website is wrong – yes, there is a gas station on the corner, but the auditorium was behind the gas station on Winspear where the parking lot is.”

This was truly an amazing theater that had the audacity to run films most mainstream houses avoided. Some of this boldness came from its proximity to the University of Buffalo, some from its superb equipment.

While most older, converted theaters managed to fit their screens inside an original prosenium arch, the Granada’s screen ran literally from wall to wall. The original arch was left intact behind said screen, and could actually be seen upon demolition if one was willing to poke around in the ruins.

Aside from the Cinemiracle presentation of “Windjammer”, probably their most audacious booking was the 1963 Russian version of “War and Peace”. This was the first Russian film shot in 70mm 6-channel sound and cost $100 million at the time (about $700 million today)! It’s extreme running time of 7 to 8 hours required running it in 2 parts on different nights. Not exactly a house moneymaker at the time..

Really, a sad end to such an adventurous theater ——–

My dad, Earl L. Hubbard Jr, managed the Granada Theater in Buffalo, N.Y. in the early 1960’s and into early 1970’s. It was a marvelous theater with all the perks, wall to wall carpeting, padded seats, chandeliers and drapes that hung over the screen that opened and closed. The picture screen went wall to wall! It was a time when the movies were a big deal when the stars actually went to grand openings at theaters. I remember seeing Annette Funicello, Ed Wynn and Tommy Sands at the premier of “Babes in Toyland” and Todd Armstrong at the opening of “Jason and the Argonauts”. Thanks for the memories Granada Theater and dad, Earl L. Hubbard, Jr. from daughter Diana.

Your dad was in Boxoffice magazine in September 1972:
http://tinyurl.com/ycfw9v9

Good stories and history on this site.

What really helped to kill this theater was lack of adequate parking. Basically, it had no lot at all, leaving patrons to ferret out street spots in a area with popular restaurants.

It’s proximity to the State University of New York at Buffalo helped to keep it running while it’s nearest competition, the Amherst, had tons of parking in a shopping mall and was only about a half mile away.

Another nail in the coffin was when the University Student Union decided to convert a lecture hall in their building into a 35MM theater. Despite objections from the local theaters, the film fanatics that were in charge managed to get a pair of Simplex E-7's
from a closed local theater and install them. The hall was actually built to accommodate such a thing, with the fire shutters already in place on the projection booth. Actually, it was technically quite spiffy, also installing a Century 4-channel magnetic stripe unit with 3 huge Voice of the Theater speakers behind screen and wall mounted units in theater.
The trick was, you had to be a student to get tickets – thereby allowing them to book popular films as well as foreign ones. Since the hall was originally called the Norton Conference Hall, it became known as the Norton Conference Theater – but not being a legit house, you won’t find it listed anywhere.

I inspected and ran their films for many years — which involved encountering things not normally associated with your average projectionist work:
Frequently they would somehow exhume prints that hadn’t been run in decades (like Moby Dick) that would barely make it through one or two showings (it’s fun to watch the film outside the sprockets peel off in long strips while it’s running!).
The machines were old and would periodically break down. It’s very difficult and borderline dangerous to tell a hallway full of stoned kids that they can’t see “Gimmie Shelter” due to technical problems (I ran an entire day on one machine, bringing up house lights every 20 minutes to change reels — pre platter days — now it’s pre digital download days — OH MY!) …. and YES, the arc housing got REALLY hot!!!
Then there was the infamous run of ‘2001’ – a favorite of the stoners. A popular audience thing was to lay on the stage with their feet up against the screen and trip out during the light show portion — one showing a guy appeared at the booth door claiming that the film was taking the wrong direction, but if he could get at the projector he could correct the course and save everybody. They carried him out of the building screaming and ranting………
I won’t say everyone was under the influence, but I think you could walk up the light beam from the screen to the booth!
Yet this was not as bad as the day the Black Student Union invaded the theater during a screening, jumping on stage and announcing that ‘2001’ was a racist film and they were shutting it down — and that’s exactly what they did by ripping down the screen, kicking in the speakers, charging the booth and ripping the 2 reels of film out of the machines and stealing them. Luckily they didn’t kick over the arc machines. Upon learing that MGM was taking legal action to get the film back, they decided it wasn’t that racist after all and returned them.

The Amherst Theater survived by dividing itself into 3 theaters – the Granada was not so fortunate (if one can call such survival tactics ‘fortunate’) and eventually went x-rated before the wrecking ball finally arrived. From it’s extremely small entrance on Main St., I’m sure many people never knew of the fantastic interior and superior management and projection of that 60’s-70’s period.

DianaD got it right: it was INDEED a time when the movies were a big deal – and had her dad been running it today, I’m sure it’s booking of ‘Avatar’ in 3-D would have been the best anywhere!

The Granada was in the University Heights district of Buffalo. I lived in the neighboring community of Eggertsville so I saw movies here and at The Amherst as a child. Granada would sometimes play classic old movie matinees in the 70s like King Kong that us kids would go to. Later I remember as a teenager walking down Main street to the Granada for my first ever viewing of Rocky Horror in 1981. I think they finally demolished it a couple years later.

I remember being on the bus going to grammar school and passing by Granada in the early eighties. I remember seeing the ROCKY HORROR PICTURE SHOW the marquee and how many weeks it was play there. I was try to find out when it closed.

The first time my parents allowed me to go to the movies alone was @ The Granada to see “The Ten Commandments”. The stories about the size of the screen are not exaggerated…when Moses parted the sea, he p-a-r-t-e-d the sea. Also, in reference to the ‘big’ pictures that opened there my memories of the première of “Around The World In 80 Days” are most vivid – the klieg lights, the limos…pretty heady stuff for Buffalo, let me tell you! The same weekend of the opening as my family was on their way to Sears – a straight shot down Main Street from The Granada, as we were stopped at a traffic light this huge black car pulled alongside ours (first limo I ever saw ‘live’) and as I turned my head to look at it, I was met by the lavender gaze of Elizabeth Taylor. She was accompanying Mike Todd to the première. Needless to say, this page has caused some pretty special memories to flow.