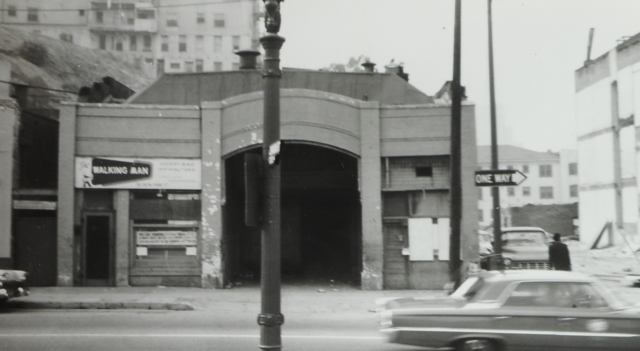 This theatre would have been a few doors west of Hope Street, on the north side of Third, and about a block east of the Lux Theatre (aka Rose Theatre, Rex Theatre.) Here’s a photo of the general location as it appeared about 1937. The theatre might have been a storefront nickelodeon in the two story building at left, though a building of that style could have been built anytime from the early 1900s to the mid 1920s.

So if the Lux at 827 W. Third was after the tunnel and close to the Beaudry intersection, then presumably 712 West would be before the tunnel, per your USC photo above. I imagine they just pick up where they left off with the street numbers once you get through the tunnel.

By the way, Joe, you forgot the Anita as an aka for the Lux.

The Lux was not very near Beaudry, and both theatres were west of the tunnel. The Lux was between Flower and Figueroa, so the Tunnel Theater would have been between Flower and Hope. The Third Street tunnel in those days ran from just east of Clay Street to the middle of the ROW of Hope Street.

In that photo to which I linked, Hope Street runs on that shelf above the tunnel, and is also the narrow street running to the left from Third Street. The parts of Hope Street joined up near Second Street. When the hill was lowered for the urban destroyal project, the Second and Third Street tunnels were both lengthened a bit on their west ends, and the dirt from the hill was piled onto the low ground into which the tunnels had previously opened.

It’s probably difficult to envision the way it all looked before the reconstruction of the land, but I can still remember quite a few details of the area’s old form.

CORRECTION: Wait a minute. I’ve gotten the street sides backward again. The odd numbered addresses are on the north sides and the even numbers on the south sides. The Tunnel Theatre would have been across Third Street from the building in the photo to which I linked. It might have been in the low building a corner of the roof of which is visible at right foreground.

What happened to the zoom function? I wish I could zero in on the next block in this 1932 photo. The Rex/Lux would have been on the left and the Tunnel on the right, assuming the Tunnel was still around by then.
http://tinyurl.com/27bq8x

Here is a 1940 William Reagh photo of the view west along 3rd Street, the block west of Hope Street in the foreground. Though I’ve seen this photo many times, I never before realized that the single-storey building with the ornate facade at near left could have been (and probably was) the Tunnel Theatre.

Here is the tunnel as listed in the 1915 city directory:
http://tinyurl.com/o5wtux

I know it’s a little hard to see, so if you need any info on the other listings, let me know and I will take a look.

Here is a still from the 1959 movie A Bucket of Blood, with a view of Third Street west from a point on Hope Street above the Third Street tunnel’s west portal. The Tunnel Theatre building is just right of center at the bottom. By 1959 the theater was no longer in operation, and the facade had lost the ornate detailing it still had in William Reagh’s 1940 photo, but it can be recognized by the tall arch that had been its entrance. The shot is dark and a bit blurry, but it gives the best view of the Tunnel Theatre I’ve seen yet.