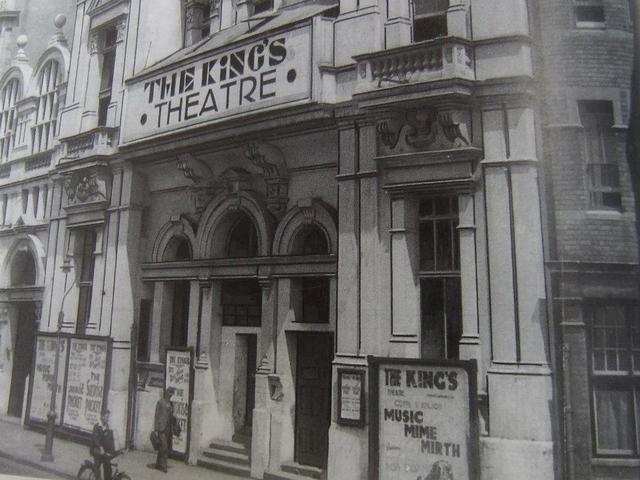 Built as the Grand Theatre in 1887. In 1904, it became a drama theatre, re-named King’s Theatre. In 1907 it was taken over by the MacNaghten Vaudeville Circuit and re-named Palace Theatre. It was re-named Palace-Hippodrome Cinema in 1912. It became part of the Biocolour Picture Theatres circuit and who were taken over by Gaumont British Theatres in November 1926. In the early-1930’s when every available building in the city was showing films, including the New Theatre and Empire Theatre, attempts were made to use this old theatre as a cinema by an independent operator who re-named it New Hippodrome Cinema.

From press advertisements and comments it appears that some redecoration was undertaken but the venture did not prove successful particularly when several nearby cinemas were rebuilt with modern standards of comfort.

A plan was submitted by March 1939 to convert the site into a garage (bearing the names of the proprietors of the former Castle Cinema almost adjacent) and contained a copy of the original theatre design. The war intervened and the O.S. map of the time shows the site as derelict.

Post-war the building was substantially altered for use as a warehouse and more recently as an auction house.

When the auctioneers relocated to a site with better access the building was acquired by the Wetherspoon pub chain. In this case there was very little, other than the frontage onto Westgate Street, to restore, so the "Gate Keeper" is a new-build pub, but retains external features from much earlier.

The rear of the building shown in the above picture dates from 1947. Examination of the building plans shows that very little of the theatre structure was incorporated into the warehouse building.
The 1880’s architect’s drawings show what started as Day’s new Grand Theatre of Varieties in considerable detail, and adverts show the top music hall stars of the time appeared there.
When the Empire was rebuilt by Frank Matcham in 1900 the Grand must have struggled as in 1904 it was advertised as the King’s Theatre offering drama. The name Palace next appeared then Palace and Hippodrome (together) as the Bioscope became a regular feature, eventually Hippodrome as a silent cinema.
Short-lived attempts to resurrect the building in the sound era used the Hippodrome name and there was also an attempt to revive “Variety” and another period as the “Kings”.