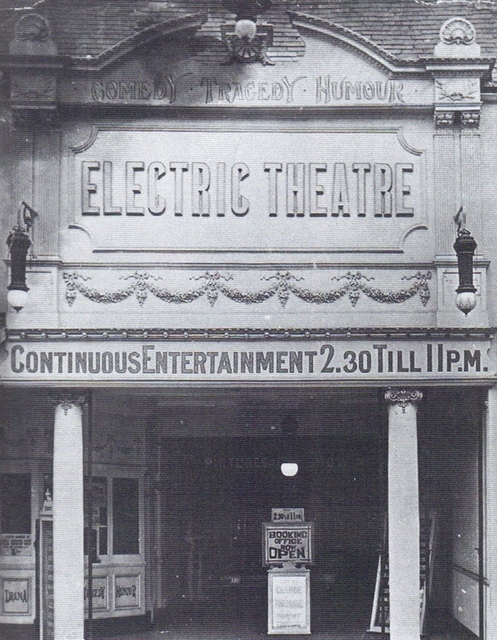 On Monday 27th September 1909 the Electric Theatre opened "to interest, amuse and elevate" showing Bioscope pictures. The American Bioscope had been a feature on the programme of the nearby Variety theatres but this was the first show exclusively consisting of film.

A picture survives showing the frontage but examination of planning records reveals that a "temporary" building with permission for five years was located behind it.

New-build cinemas opened in the same street and existing halls were converted within months and the Electric Theatre soon started calling itself "The Old Original" in advertisements.

A motor dealer occupied the site afterwards and by 1921 the site was built over as part of the Dominion’s Arcade block, home for many years of some of the major film distributors.

The fact that the name Electric Theatre became a generic term for early cinemas has caused some confusion in attributing old photographs as the same phrase was used on the frontage of the cinema which became known as the Imperial, though this name was not used in advertisements in the first weeks of its existence.

The replacement building for the Electric Cinema included some specially designed accommodation for the use of the big film distributors. At the arcade level there were offices for Warner Pathe (where I worked) MGM, Rank and Anglo Amalgamated. The arcade being better known as little Wardour Street. However, below the surface were a set of fire proof vaults that the distributors originally used to house their inflammable film and the later non flammable stock.Each company had their own area of the vaults with the film storage rooms being guarded by heavy steel, fireproof doors.

These vaults were very busy and operated to dispatch and delivery timetables operated by a specialist film transport company named FTS (Film Transport Services).Access to the vaults was via a bay at the back of the building connected to a heavy duty lift that conveyed the film cases down into the vaults proper. Busy times were Sunday mornings,Thursday mornings and Friday afternoons. The FTS lorries would come into the bay and unload a large quantity of metal film containers plus the many cardboard containers that held Pathe News,Gaumont British News, Look at Life and other short reels.

When FTS van arrived all of the vault staff (and often some office staff)turned out and the containers were quickly sorted out and claimed by their respective company staff. Some were immediately relabeled and sent out again on the same van. Others were taken back down into the vaults. There the boxes were opened and the cans of film placed back on the vault shelves.All of the companies had repair workshops where prints were maintained. The three big companies had large rooms that employed at least four repairers in each. The smallest company (MGM) employed one repairer who was located in the MGM dispatch office and not in a separate workshop.

If a cinema complained about a copy, it was sent to a repairer as soon as it arrived back at the vault.Repairers, wearing cotton gloves, would place the open reels on spools and wind the film through their gloved hands. When a snag was felt, the film would be inspected and repairs made. If the damage was just one broken sprocket hole – then a V cut was made to remove the outside of the hole.If the frame was seriously damaged then the frame would be removed and the film spliced. The favourite tool for this task was the Premier Film Splicer. Neat Acetone was used as a cement A cut and splice would never take more than a minute to complete.

Sometimes a cinema would report that they had a print which for some reason could not be shown.The normal causes being a film that had run off sprocket at a previous hall and therefore possessed serious unreported scratches or sprocket holes. The film distributing company would then have the problem of rushing another copy to the cinema concerned. The first line of attack was to use rail transport to the nearest station. If the cinema was not on a rail line then often a member of staff took the replacement copy by bus or taxi to the cinema. It was through making these film deliveries that I got to know many local projectionists and their boxes, eventually becoming a projectionist myself.

The former entrance to the Dominion’s Arcade film vaults can be very clearly seen on Google Earth’s Street View. Look for Crockherbtown Lane. The vault entrance is at the west end of the lane in what is now a blind alley. The words Dominion Arcade and the date are clearly visible.