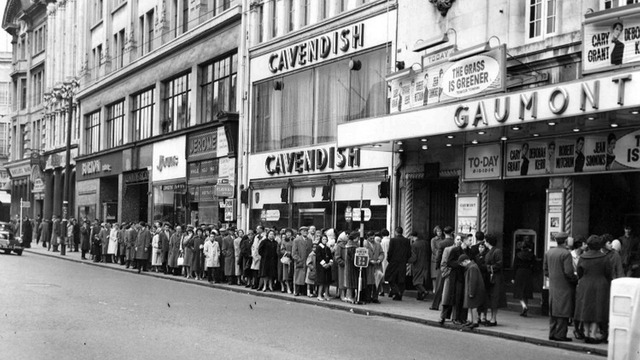 The site in Queen Street had been a music hall, known as Levino’s Hall which opened in 1887 and operated under several names.

In 1889 it became the first theatre to be operated by Oswald Stoll and it re-opened as the Empire Theatre on 30th September 1889. Oswald Stoll employed the celebrated theatre architect Frank Matcham to re-build the theatre and it re-opened on 4th May 1886. Fire destroyed most of this building on 30th October 1899 and again Frank Matcham was employed to re-build a new Empire Theatre. It re-opened on 29th September 1900 as the Empire Palace Theatre and had a seating capacity of 1,726.

In 1915 more rebuilding work was carried out, this time by noted theatre architects' W. & T.R. Milburn and the seating capacity was provided for 2,820. By then, Oswald Stoll had joined with Edward Moss and the Cardiff Empire Theatre operated as a major theatre on the Moss Empires theatre circuit.

The Empire Theatre was purchased by Gaumont British Theatres Corporation and they equipped it and made alterations to convert into a cinema, with provision being retained for live shows. It re-opened on 7th September 1931. Live shows ran exlusively during September and October 1932. It closed in June 1933 for extensive alterations to be carried out and re-opened in August 1933. A Compton 3Manual/10Ranks theatre organ was installed and it was opened by Fredric Bayco.

The Gaumont name was adopted in 1954 when the theatre/cinema was programmed by the Rank Organisation, usually receiving the second release behind the larger Capitol Cinema. The Compton organ was removed from the building in 1955 and sold to a church in Bristol.

Much of the internal decoration survived from earlier times and to cope with the very high projection box the screen had to be designed to slope backwards to reduce "keystoning".

As audiences dwindled Rank debated which of their three cinemas to close, and eventually selected the Gaumont, closing on 30th December 1961. Live shows which had been ideally suited to the Gaumont’s large stage and backstage facilities were relocated to the Capitol Cinema where there were some stage facilities but larger seating capacity.

What is ‘keystoning’ on a screen

Adjusting the angle of the projector and the screen to get a square or rectangular image in front of the audience.

I take it this is only needed when a projection box is in a difficult position in the auditorium.

No. All projection heads contained some type of plate that would govern the area of screen that received the image. For example a cinemascope plate would be rectangular as would the smaller wide screen plate. Flat screen plates would be almost square. These plates were changed over depending on the film being shown. The location of the plates being always immediately before the primary lens. Every projector had a set of plates that were individually created to match that projector’s position in that particular box. The plates were cut in such a way that the screened image was of the correct proportion and identically positioned to the image projected by the other projector.

Most of the projection heads in the small south Wales halls were of Kalee,BTH Super, Westar or in extreme cases antique devices of RCA origin. None of these were originally designed for Scope although all of them were easily adapted to to the new format.Adapting meant changing the aperture plate and primary lens, then swinging the anopticon scope lens in front of the replaced primary lens. Kalee plates were robust affairs that slid in from the top of the head. Westar plates were small fiddly brass affairs that were slid into a slot at the side of the head.Projectionists often used pliers for this change as the plates would get very hot and were difficult to grip.

The gear driven BTH Supers were the worst of all machines to switch from flat screen to scope projection. Nearly of of them had been scrapped by 1960 and were often replaced by older Kalee machines from closed houses. Many cinemas retained the robust BTH stands and mounted Peerless Arcs and Westar heads on them.The Monico in Rhiwbina was a good example of this practice.

Scope brought a lot of headaches for projectionists. Especially when a hall was showing two wide screen presentations with a scope trailer in between. Projectionists had to work at an extremely fast rate to effect the format changes if they wanted a slick presentation.

That is absolutely fascinating. Thank you so much for that.

No trace of the Empire/Gaumont remains and now Primark are moving across the road into a building originally built for Woolworths and later occupied by BHS.(A theatre was planned but not built on this site ca 1910)

The organ, which had been played by Idris Thomas, was removed in 1955 and sold to a church in Bristol.