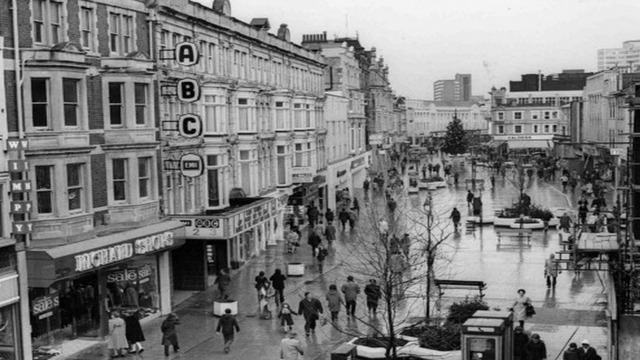 At this time the cinema was still run by the Andrews family of Cardiff until around 1935 when it was leased to the Associated British Cinemas(ABC) chain who modernised the cinema, but still retaining its huge capacity in stalls and balcony of around 2,000.

In the early-1960’s the cinema was refitted and made-over for 70mm films on its huge 58 foot CinemaScope screen. Projection was from under the balcony using DP70/35 projectors with a direct throw to the screen.

The prime location in the centre of the main shopping area in Cardiff made this a very busy cinema and long runs of films often played here.

The final film to show in the cinema was “Jaws”, and after a three-month run of the film, the cinema closed in 1976 for conversion to a three-screen complex. After completion, Screen 1 in the original circle area seated 617, Screens 2 and 3 in the former stalls area seating 318 and 150, new projection rooms were also fitted to serve Screen 1 and a combined projection room was fitted to serve Screen 2 and 3, all equiped with Phillips projectors. The cinema was now known as the ABC Queen Street Cardiff.

With the opening of the five-screen Capitol Odeon and the UCI multiplex in Cardiff Bay, and with plans for two further multiplexes in the city, ABC finally made the decision to close the cinema in 1999, the prime location making it more viable for other retail purposes.

The site on the North side of Queen Street, which included the former Odeon and Olympia(ABC) was totally cleared, with the exception of the frontage of the former ‘Andrews Buildings, which included the entrance to the Olympia, and the former office of architect H. Teather. A totally new retail development was built on the site, but where new frontages were included, they are similar in size and slightly resemble the old buildings.

I always thought that the ABC Olympia was a bit of a tardis, in that with its small entrance in queen st. the large superb auditorium was unexpected.half of the actual auditorium was below ground leval of course.

Do You Know Allan, I never thought of the Tardis comparism, I like it. In fact the auditorium was virtually a seperate building from the buildins fronting Queen Street. The long rising foyer actually went through those buildings to the cinema proper at the rear. Yes the auditoriun was partially below ground level and in fact even lower than that was, enser the stage apron was a spring of water, which had its ownn sump pump to get rid of the water as it rose in its well.

You can find additional details from the original architects' drawings for the Andrews Hall and the re-construction in 1935 as the Olympia,then largely unaltered until the late fifties, at the newly constructed Glamorgan Archive, near the City Stadium.
S Andrews built a row of buildings fronting Queen Street as mainly shops and offices, with the hall at the rear and with an arcade nearby serving as an exit, and leading to the lane which ran behind the Olympia, Odeon and Gaumont and emerged onto Park Place opposite the Park Hall.At the western end of the lane was the film distribution vault described by Editha Pearce.

I actually worked there so am rather familiar with the building and its environments.The arcade alongside the cinema was called Andrews Arcade, and into this arcade were Three emergency exits (incorporating, via a catwalk, the Box emergency exit) and at the Crockherbtown Lane end, the doors to the boiler house, which in my time housed a gas boiler with a plennum system clean air distributor above it.
When the Proscenium arch was dismantled ready for Todd AO, we found on the rear wall of the stage area, a guigantic painting of a female ice skater with the words To Skate is to be Beautiful alongside it, so sometime in the past perhaps ice skating took place here.

Thanks to mickrick for the above comment. In the early 1900’s, roller skating was very popular and was offered in a number of halls , some later converted into cinemas.
Roller skating was advertised in the local paper at the Olympia for a while at the height of this craze, maybe the painting dates from this time?
Do any photographs exist of the picture, or of the proscenium before demolition?

You are probably right with the roller skating and no, unfortunately I do not recall any photographs being taken atb the time, but if any exist I would think they would be in Associated British Cinemas' archives somewhere. I often regret not keeping a pictorial record of my time in the cinema industry but these lessons are not learned until too late. I can still remember after taking down the screen, moving out the old speakers (Perspecta Stereo) and there on the rear stage wall was this full colour painting, sadly covered up again within days by the neww deeply curved Todd AO size screen

Hi all, Allanevans mentions that he has photo’s of the ABC before it was converted. I was a regular at the ABC minors during the 60’s and I absolutely loved that place. If anyone has photo’s or movies of the interior I would love to see them. Email me at .au I now have my own private cinema…..16mm 8mm and digital….so the passion for film continues. Also, any photo’s of other cinema’s in Cardiff such as park lane or Odeon or Capitol would be appreciated.

Hi Allanevans, I was wondering if you have read my last email..I would love to see the old image of that wonderful place.

One plan showing the alterations for the large curved screen for 70mm has survived in the Archive.