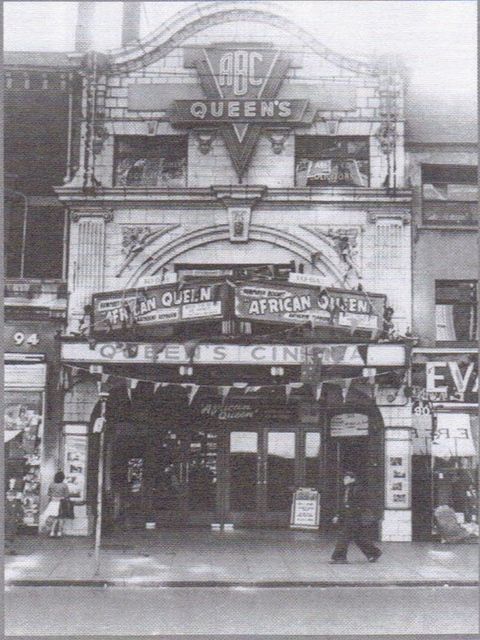 One of the first purpose built cinemas in Cardiff, subsequently extended and adapted, It opened as the Cardiff Cinematograph Theatre on 19th July 1911.
Remembered as the first to be converted for "talkies" attracting huge audiences for Al Jolson’s "Singing Fool".

Taken over by Savoy Cinemas circuit in September 1925, it was re-named Queen’s Cinema. Savoy Cinemas became part of the Associated British Cinemas(ABC) chain and they operated it for the remainder of its cinematic life. Their trademark ‘ABC’ triangle covered over the original name on the white tiled frontage. The Queen’s Cinema was very much second-best to the ABC owned Olympia Cinema, a short distance away, after that building had been substantially rebuilt and extended.

In the 1930’s the Queen’s Cinema and the Pavilion Cinema (then also operated by ABC) often showed the same programme.

By the 1950’s the Queen’s Cinema was showing re-runs and submitted a planning application for a very simple adaptation for a 30feet wide CinemaScope screen, attaching a photograph of the existing layout. There is no evidence that the work was carried out as the Queen’s Cinema closed on 29th October 1955. Demolition followed some time later (around 1958) for shops to be built.

As a cinema mad child in Cardiff in the early 1950s, I was taken to the Queen’s Cinema many times by members of my family. It was a warm comfortable cinema that mainly specialised in second run family orientated features.It had the lowest prices in Queen Street which made it attractive to families that were not too well off. After the Coronation in June 1953, the Queens ran a full length film of the Coronation event for several months. I saw the film many times and remember the long queues waiting to gain admission. After closure it was quickly converted into a Wyman’s newspaper and book shop.

The Queen’s Cinema closed soon after I moved permanently to Cardiff to take up a post with Warner Pathe at the Dominions Arcade.The hall possessed brown varnished entrance doors, fitted with glass panels,which faced directly on to Queen’s Street. After the closure I noticed that rubbish had gradually begun to pile up inside of the entrance and eventually the doors were boarded over when the windows were smashed.

The change to a branch of Wymans was very rapid, taking place some months after the closure. The shuttered doors were there one week and a new fascia was in place the next. Wymans store consisted of an open air newspaper kiosk on the west side of the entrance with the main entrance door located further back in the building.I visited Wymans soon after it opened and can recall that the store was ground floor only, with a low ceiling, and reached right back to where the screen had been sited.

I’ve been wrecking my brain trying to visualise all that I can remember from that period.The Queen’s Cinema stood sandwiched between two other buildings and I cannot recall if it was a complete building in its own right.Therefore I’m wondering if the outer shell of the Queen’s Cinema was actually demolished?

I was last in Cardiff sometime around the very early 1960’s and these are the memories of an old woman which may be at fault.Can anyone on the ground in Cardiff confirm my thoughts about the fate of the building?

From the photo the building on the right is an ‘Evans’ store which caters to plus sizes.

The Wymans newsagents chain was taken over by John Menzies and the store was rebranded and stayed as a newsagents until the late 1990’s. From memory it was a 2 storey unit which went very deep but showed no traces of a former cinema.

The building to the left today is a branch of NatWest.

Thanks for locating the picture which has done much to refresh my aged memory.I can recall that the auditorium was definitely much wider than the entrance area. Therefore I would think that the cinema was formed from two separate constructions joined together to make a whole. The front of house being a conversion from a 19th century commercial/ residential building complete with chimneys (witness Evans Outsize Shop to the left which seems to be of the same genre) and the Queen’s auditorium being a separate, and much wider, new build circa 1911.The queue line to enter the hall always stretched along the west side of the entrance.

It is interesting to note that the offices of the legal firm Leo Abse and Cohen were housed at the top of the front of house portion of the cinema.I can recall that the entrance to these offices was from a separate door located to the right of the main cinema entrance.

The two black wires running horizontally across the top of the picture are probably trolley bus wires.Trolley buses replaced trams in the early 1950s. Thus the two angled poster sites were probably strategically located so that they could easily be observed by tram car passengers (and later trolley bus passengers) from the upper decks of these vehicles.

The building which replaced the Queens Cinema also used the site of the Evans shop.The current occupiers , Specsavers, recently moved from one shop unit into the other (on the cinema foyer site). No. 94, also visible in the picture became part of the adjoining bank, but when the Cardiff Cinema opened there was also a small entertainment hall, called the Queens Hall advertised at that address.