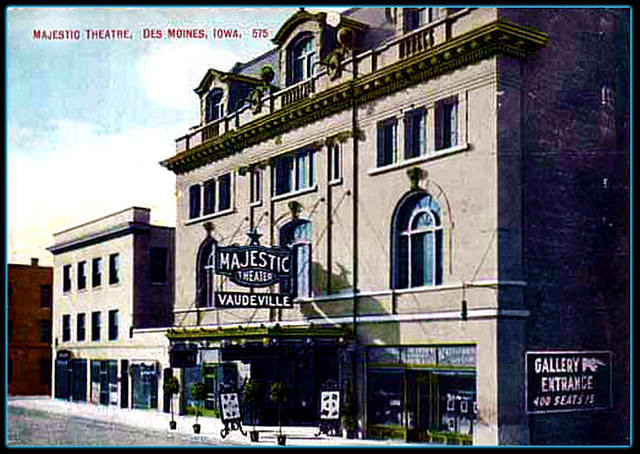 The Majestic Theatre in Des Moines opened on November 17, 1907 and was designed by Rapp & Rapp. The building sat at 210 8th Street and was reportedly built at a cost of $125,000. By January 1908 it had been renamed Orpheum Theatre (not to be confused with the former Empress/Pantages/Sherman/RKO Orpheum Theatre at 412 8th Street).

The theatre was built as a vaudeville house but started showing movies in 1909. Seating consisted of the main floor, balcony, gallery and twelve proscenium boxes, six on each side. The theatre was later renamed the Garrick Theatre and then the President Theatre, and closed as a silent movie theatre around 1929. It was torn down in 1938.

From Des Moines in the early 1900s a view of the MajesticTheatre before it became the Garrick or President.

The history of this theater is puzzling. It opened as the Majestic in 1907, but by 1915 206-210 8th Street was listed in the city directory as the address of the Orpheum Theatre, and 313-317 8th Street is listed as the location of the Majestic Theatre. Orpheum vaudeville moved to the Sherman (previously Empress) Theatre in 1922, and that house was renamed the Orpheum Theatre.

Local impresarios Elbert and Getchell then took over the house at 210 8th and renamed it the Iowa Theatre. The Iowa was operated as a legitimate house, and closed after one year. The first photo on this web page shows the theater at 210 8th Street with the name Majestic on it, and from the dress and hair styles of the women and a fragment of a parked car it is clear that the photo was taken in the early to mid-1920s, so the house must have returned to its original name after the Iowa closed. I don’t know what became of the other Majestic at 317 8th Street.

From listings in various issues of The Billboard it is clear that there were houses called the Majestic and the Orpheum operating in Des Moines at the same time as early as 1908, but as no addresses are listed for either theater at that time there’s no telling which name then belonged to this house. It might have been renamed Orpheum fairly soon after opening, or it might have been called the Majestic for several years, in which case there was then another Orpheum somewhere in Des Moines.

The entire 8th street cluster of theatres is puzzling. At some point, I’ll post what I’ve researched on this. For now, just know that up and down 8th were a lot of theatres with similar names, often run by the same people: Empire, Empress, 2 Majestic’s, 2 Orpheums, a Black Cat, possibly a Strand, as well as temporary names Iowa/Sherman/Pantages!