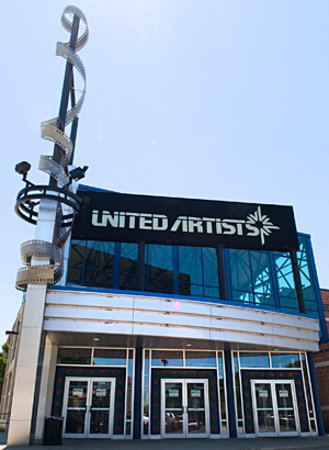 The 1,300-seat United Artists Main Street 6 opened March 6, 1997 screening Howard Stern’s “Private Parts”. Located at Main Street and Ridge Avenue in the Philadelphia neighborhood of Manayunk. It opened as part of a $10 million complex that included two new restaurants and 400 parking spots. Philadelphia developer Bart Blatstein who also built in Philadelphia the Riverview for United Artists operation and the Pearl, constructed the theatre. The architectural firm JKRoller Architects of Philadelphia, PA designed this theatre. The six auditoriums are not stadium seated, but now have recliners seats which has reduced the seating capacity to 541. From 2008, the Epic Church has used one of the auditoriums on a Sunday morning for services.

The June 1999 Philadelphia Magazine rated the UA Main Street 6 a “3” on a 1 to 5 scale with comment: “Manayunk deserves better” A high rating was awarded in the Seating category. Instead of the characterization “First-run mainstream” applied to other mainstream moviehouses, the term “Lame mainstream” was used.

Most Hit or Miss
If you catch a flick on one of the United Artists' Main Street 6’s two giant screens, you’re in for an enveloping treat. If you get stuck in one of its four smaller houses, well, you’re screwed.

Quote from Philadelphia Business Journal-April 14, 2017- Sean McCloskey’s Penn Real Estate Group………. recently bought the United Artists movie theater and its associated shopping center from Bart Blatstein’s Tower Investments for $5.6 million. It was one of Blatstein’s first projects and was built more than 20 years ago. “Time to transition it,” Blatstein said about the sale.

The theater will get more than $1 million in renovations. New plush seating will halve its 1,500 seats and new food and beverage offerings will be provided.