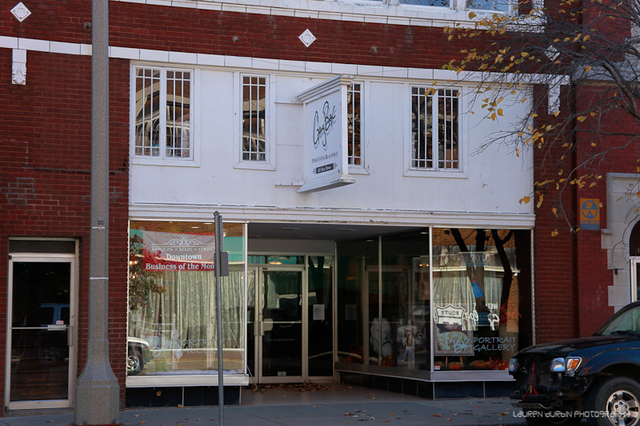 Since Sapulpa is a suburb of Tulsa the State Theater held a big city look. Designed in conservative Gothic style architecture the State Theater was quite distinctive in appearance. It was opened by the Griffith Amusement Co. on August 11, 1939. It was closed on May 20, 1956 with Randolph Scott in “Badman’s Territory” & Robert Ryan in “Deadman’s Canyon”.

Miss Melba:
After looking at the OHS photos, I honestly don’t beleive your posting are images of the State in Sapulpa. There is no resemblance.

The Tulsa Library pictures linked by Miss Melba Toast are of the Yale Theater in downtown Sapulpa.

Address for the State Theatre is 118 E. Dewey.
http://www.roadsideoklahoma.com/node/625

The first street view is of the Yale, and it doesn’t look much like the historic photos as it appears the top of the building was rebuilt.
The second street view is off a bit. Its the building to the left of the white pickup. Red brick, strong white trim and a glass display area. That’s the State. Compare to the photos on the okhistory.cuadra.com website.
I’d link the photos on my site, but I had a database error and poof! I’ll get those photos back up as soon as possible.

The Griffith Circuit opened the State Theatre on August 11, 1939 as the “B” theatre to the circuit’s “A” Yale Theatre. When the Teepee Drive-In opened in 1950, the Teepee and the State operated part year. In July of 1954, however, the Yale Theatre burned down and the State reopened that year earlier than normal to take on the Yale bookings.

Video Independent Theatres also equipped the State with widescreen to accommodate the CinemaScope offerings when it relaunched on August 1, 1954. In 1956, the State was demoted to weekend operation only. It closed with Randolph Scott in “Badman’s Territory” and Robert Ryan in “Devil’s Canyon” on May 20, 1956. The theater appeared to stay empty other than a holiday screening until the end of its 20-year lease. In 1959, the theatre was converted to Harrison’s Clothiers retail store.