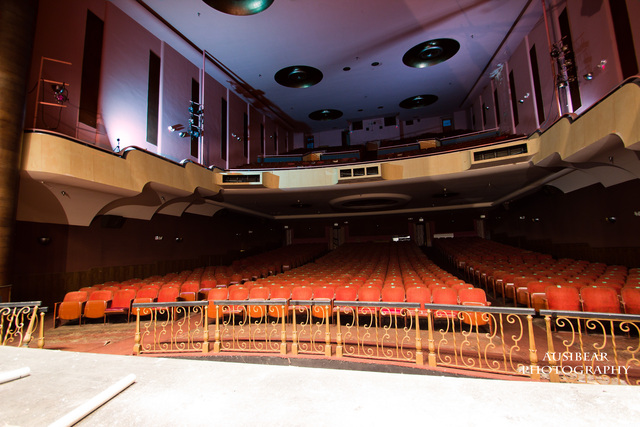 The Robinson Grand Theatre was opened February 5, 1913. It was rebuilt in summer of 1927. It was gutted by fire on May 31, 1939. Architect Tracey R. Stephens drew plans for the renovations. It was renovated and reopened as the Robinson Grand Performing Arts Theatre in October 2021.

The obituary of Claude Robinson appeared in Boxoffice of January 1, 1949. It says that it was while he was living in New York in 1913 and 1914 that his brother, Reuben, persuaded him to invest in a new theater in Clarksburg, which became the Robinson Grand.

Another Boxoffice article, published November 12, 1938, was based on a items that had been published in a Philadelphia trade paper in 1915, and it made reference to “Rube” Robinson using movies from Paramount, Metro, and Fox at the Robinson-Grand Theatre in Clarksburg. The house may have had Grand on its marquee, but the Robinson brothers were definitely associated with it by 1915, and it was certainly showing movies by then. The Obituary also gives the date of the first remodeling as 1927. Perhaps work began in 1927 and was completed in 1928.

Thanks to a user comment by William Brandon on a Flickr photo page linked above, I’ve found the 2000 “Images of America” series book about Harrison County at Google Books, and as William said there’s a photo of the Grand, probably from 1927 (the caption says “shortly after 1900” but the movie on the marquee is probably one released in 1927), and the name “Keith” is across the top of the vertical “Grand” sign, and “Vaudeville” across the bottom, so the house was at least for a while part of the Keith vaudeville circuit. The caption of this photo also says that the architect of the Grand Theatre building was R.C. Holmboe.

Another interesting bit of information I’ve stumbled on is that there was a Grand Theatre in Clarksburg listed in the 1904-1905 edition of Julius Khan’s Official Theatrical Guide. This was an 800-seat house managed by a Mr. R.A. Farland. Could this theater have been a predecessor to the Robinson Grand? Perhaps burned and rebuilt in 1912?

A strange item appeared in Boxoffice of November 12, 1938. There’s a photo of the Robinson Grand showing the new marquee and vertical sign recently installed. A few paragraphs of text below the photo praise the marquee, but criticize the failure to remodel the facade of the building itself. The item has no by-line, so I have to assume it was an editorial opinion by the magazine. I’ve never seen another item of this sort in Boxoffice. But the marquee in the picture appears to be the same one the house still has, so it’s quite a relic itself. I wonder if any of the original neon detail survives in storage somewhere?

Boxoffice of March 11, 1939, ran a “Ten years ago” feature which included news from 1929 that “Bill Pritchard and Guy P. Gregg open their new Grand, Clarksburg, W. Va.” I don’t know if this was the same Grand Theatre, perhaps briefly operated under a lease, but it’s the only Boxoffice item I’ve found mentioning Pritchard or Gregg in connection with a Grand Theatre at Clarksburg or anywhere else.

Many issue of Boxoffice mention Madge Stout, noted in Robinson’s obituary as his long-time assistant, who became the manager of both the Robinson Grand and Moore’s Opera House after Robinson’s death. She remained manager of Moore’s until its closing (about 1958-1959) and was still manager of the Robinson Grand as late as 1975. One item indicated that she had gone to work for Robinson at the Grand Theatre about 1925. Fifty years at one theater is quite a career.

The Rose Garden Theater is currently the legal title of this property as per Trust Deed dated October 20, 1999 with James D. LaRosa as owner.

The Tuesday, November 24, 2009 Clarksburg Exponent Telegram has a legal notice announcing the auction of this property on January, 12, 2010 on the steps of the Harrison County Courthouse at 11:00am E.S.T.

A great opportunity for some wealthy individual to acquire, restore and reopen this historic house
A Big Thank You ! to Joe Vogel for posting all the great information on this Theatre in the item above this posting.

Here is an updated link to the 1938 Boxoffice photo of the Robinson Grand’s marquee.

The registration form for the inclusion of the Downtown Clarksburg Historic District on the NRHP says that after the Robinson Grand Theatre was gutted by fire on May 31, 1939, the repairs cost over $600,000.

The second of two photos (click the thumbnail and then the “slide show” link at the bottom of the enlarged photo for a high resolution version) on this web page shows that the brick of the auditorium’s side wall differs considerably from the brick on the rest of the building, as the auditorium that opened in 1940 was entirely new.

The entry for architect Tracy R. Stephens in the 1956 edition of the AIA’s American Architects Directory lists the Robinson Grand Theatre as one of his projects, dated 1939.

We currently have the wrong the initials for architect Holmboe. I’ve found many period references to an architect named E.C.S. Holmboe, but none to an R.C. Holmboe. Holmboe’s partner in the firm of Holmboe & Lafferty was Robert C. Lafferty, which is probably where the initials R.C. came from.

Looking at the pipe organ records from M.P. Moller it would appear that Claude Robinson bought 2 organs from them in 1915. One was listed for the Grand and one for the Orpheum. The one installed here had 9 ranks of pipes. The Orpheum’s came a little later that year and was slightly smaller at 8 ranks, but Mr. Robinson only saved $50 on the Orpheum’s.

This history of Clarksburg’s theaters says that the Robinson Grand Theatre opened on February 5, 1913.

This item about the 1927 rebuilding of the Robinson Grand Theatre is from the July 9 issue of The Moving Picture World:

“Construction work on the Robinson Grand Theatre, Clarksburg, W. Va., is being speeded up by increased labor and a night shift in an effort to get the new playhouse ready for its formal opening, scheduled for Labor Day, or, perhaps, a little sooner. Interior decorating is to begin within a short time. All steel construction is being used throughout in the building, and it is said that the house is as near fireproof as engineers can make it.”

This theatre has been (mostly) restored and is currently open again!