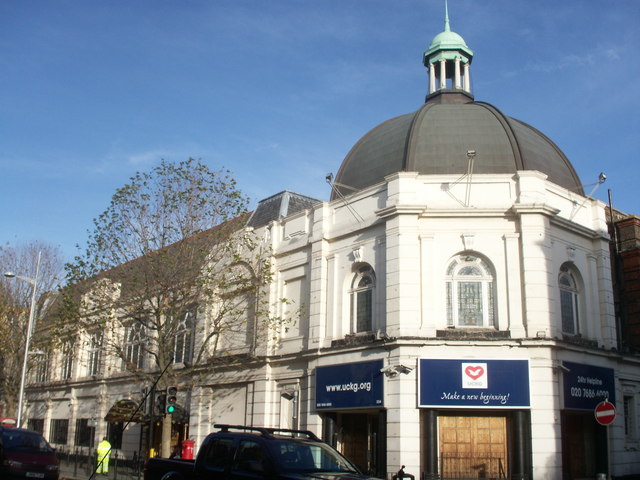 Located in the northwest London district of Kilburn. The Grange Cinema opened on 30th July 1914 and was hailed at the time as ‘the largest purpose built cinema in Great Britain’. The opening film was "She Stoop’s to Conquer". It was a project of the North Metropolitan Circuit and even today it stands out as a perfect example of the type of super cinemas which were to be built over a decade later.

The building takes up a whole block and has the cinema’s name and date on the upper section of the facade facing the High Road. It has a corner entrance topped by a large copper dome. Inside the foyer is a galleried oval rotunda with a stairway leading to what was the tea room and into the circle. Seating in the circle is extended forward on the front sides towards the proscenium via a slips section, which would have given a rather distorted view of the screen. Initially the Grange Cinema was equipped with a Nicholson & Lord 3Manual/38 speaking stops straight organ. This was replaced by a Wurlitzer 2Manual/8Ranks model ‘F’ theatre organ which was opened by Florence De Jong on 31st October 1927.

From February 1929 the Grange Cinema was taken over by Gaumont British Theatres and they in turn became part of the Rank Organisation. Rank closed the Grange Cinema on 14th June 1975 with Peter Cushing in "The Ghoul" and Joan Collins in "I Don’t Want to be Born". At that time the area just couldn’t support the 2,028 seat Grange Cinema and the 4,004 seat Gaumont State Theatre(by then seating 2,524 in the cinema and a large bingo club) which was also operated by Rank, almost directly across the road from the Grange Cinema.

The Grange Cinema was converted into Butty’s Nightclub which opened on 23rd February 1976. This later became the National Ballroom, and then a popular live music venue named the National Club which catered for the large Irish community in the area. The National Club closed in spring 1999 and the building was empty and unused for several years.

It was taken over by an evangelical church group, but this came to an end when the preacher was convicted of sexual misconduct with members of his congregation. It is now operated by the Brazilian based ‘United Church of the Kingdom of God’.

The building is Grade II Listed.

Shouldn’t this cinema be “Grange Kilburn”, to enable it to be searched under Kilburn (see nearby cinemas)?

This cinema is featured extensively in the 1962 film “The Traitors” as the rendezvous point of spies, one of whom meets his end in the Dress Circle during a very noisy and unseen (presumably) war picture. Good shots of the exterior, and quite the tour of a very grand-looking interior, including a chase up the Circle staircase.