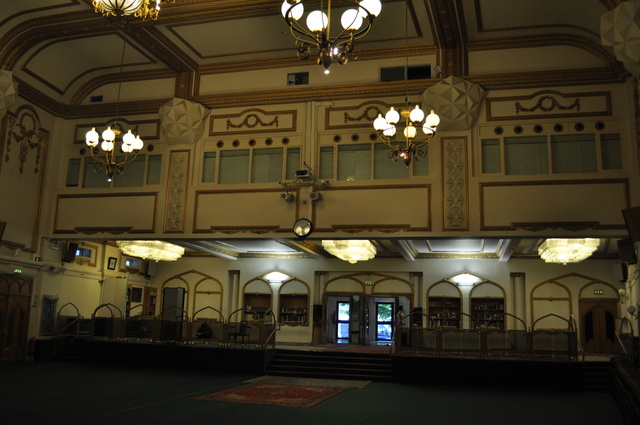 Located in the West London district of Maida Vale, immediately to the south of Kilburn. The Picture Palace opened on 27th January 1913 with the renown dancer Saharet in "Man Behind the Mask". It had a magnificent seven-piece orchestra conducted by T.M. Paiba and was equipped with a straight organ. The building was described as ‘London’s most luxurious picture theatre’.

The exterior has two main towers, topped with copper domes which are located on each end of the facade. Inside the entrance vestibule was a marble floor and there was a grand Georgian style mantlepiece with a dog grate in the open fire. The main bulk of the seating capacity was on the stalls level and there was a small circle which contained a number of curtained boxes. The auditorium walls were panelled with figured oak and fibrous plaster and the ceiling had a large central dome. There was a tea-room located above the entrance foyer.

The Palace was taken over by Provincial Cinematograph Theatres(PCT) in 1920 and re-named Picture House in 1923. In 1927 it was transferred to Associated Provincial Picture Houses when a new Wurlitzer 2Manual/6Ranks style ’D' theatre organ was installed. It was opened by noted organist Reginald Foort on 5th September 1927. Gaumont British Theatres took control in 1929 and they operated it until closing due to wartime conditions in November 1940.

In never re-opened as a cinema and after the war in 1949 alterations were made to the stalls floor and it re-opened as a dance hall named the Carlton Rooms operated by Mecca Dancing. Live broadcasts of popular orchestras were made by the BBC from the Carlton Rooms over the following years. But times were changing, and in 1961 it became a Mecca Bingo Club. The building gained a Grade II Listed building status in 1991.

Bingo continued, last operated by Jasmine Bingo who closed the building in early-1996. In 1997 work was being carried out to convert the building into its current use as an Islamic cultural Centre and religious meeting room. Due care was taken to preserve the building, in keeping with its Grade II Listed building status, and the new owners have done a splendid job on the restoration.

Interior picture of the Picture House as a bingo hall in 1987 here:–