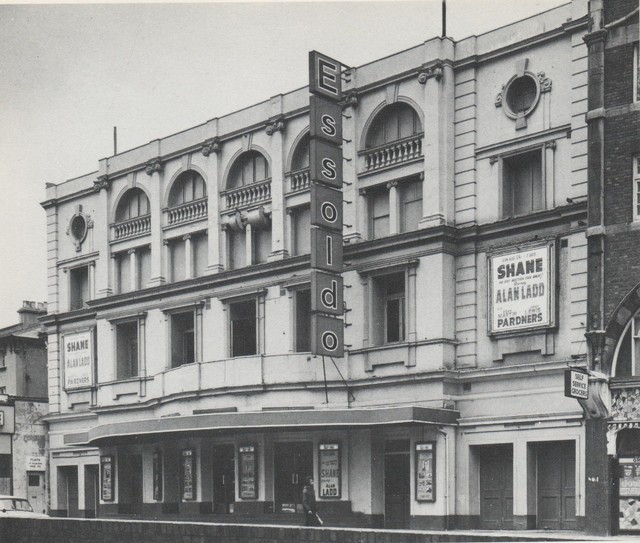 The building was errected in 1906 to plans by an architect named Hingston (who also designed the Hippodrome Theatre, Putney, southwest London). Here in the northwest London district of Kilburn, the New Kilburn Empire, as it was to be called, had problems obtaining a full licence to open and noted theatre architect William George Robert Sprague was brought in to re-design the building. It opened in 1908 as the Kilburn Empire Music Hall and Theatre of Varieties.

Seating was provided in orchestra stalls, dress circle and gallery and a feature of the facilities provided was the provision of animal traps and elephant pits located under the stage which were used to house animals which were used in variety shows at that period of time. Films were also part of the variety bill during the early days and for a short while the theatre was known as the Kilburn Vaudeville Theatre.

From 6th November 1927 regular film performances were held on Sundays only, Mondays-Saturdays were still used as a variety theatre. This policy lasted until 6th June 1949 when it was sold to the Essoldo circuit and live stage shows ceased and it became a full time cinema re-named Essoldo Cinema. The stage was used on Sundays for several years when the BBC hired the theatre to broadcast their popular radio variety show ‘Variety Bandbox’ live from the venue.

In 1970 the Essoldo Cinema was closed for modernisation. The entire decorative stone facade was covered over in blue metal cladding, the foyers had drop ceilings installed hiding original plaster mouldings and curtains were hung on the walls. The auditorium received the most alteration when the floor was extended forward from the front of the dress circle down to the front of the stage. A false ceiling was suspended across from the underside of the gallery to the proscenium arch which was hidden from view. The new auditorium now seated 471 and had curtained walls. The original orchestra stalls seating area was unused and became a storage space. To the general public and patrons using the building, there was no trace to be seen of the original splendid Edwardian Beaux-Arts decoration. It re-opened on 3rd December 1970 with Alan Arkin in “Catch 22”.

On 1st April 1972 it became the Classic Cinema but this closed on 1st December 1973. It was re-opened by impresario and theatre owner Larry Parnes as a live theatre re-named the Broadway Theatre. The dressing rooms, unused for over 20 years, were renovated and the stage brought back into use with a production of “Cycle Sluts” (a male drag-group, direct from Los Angeles) in April & May 1976 which proved popular, but unfortunately it opened at the same time as another drag revue “La Grande Eugene” at the Round House in Camden Town. The next production to be staged was the British ‘sex’ comedy hit “Pyjama Tops” which had a glass-fronted swimming pool installed on the stage. After a couple more productions the Broadway Theatre closed, its far-away distance from London’s West End theatre district being given as one reason for the failure.

It re-opened as a cinema again but this was short-lived and it closed on 12th April 1981 with Joseph Olita in the Kenyan film “Amin: The Rise and Fall”. It lay unused until 1984 when a religious group took over for a while. Its final use was when it opened up as a Quazar Lazar game centre where partipants used the rambling building as a paint ball war zone. After many more years of dereliction it was demolished in May 1994.

The Regents Plaza Hotel (now the Marriott Maida Vale Hotel) and small retail units were built on the site and a mini-cab office called Empire Cars operated in one of the retail units occupying the site of the former Empire Theatre entrance. By 2012 it was occupied by an office of Financial Angels.

Hi Ken,
I didnt realise that is was at the bottom of the High rd near the Maida Vale Picturehouse, in the picture in malcolm webbs book Greater London’s Suburban Cinemas, there appears to be a railway bridge to the left of the cinema, so I thought it was at the top end of the High Rd near the Jubilee line Kilburn Station. In Malcolms book there is also a Classic cinema (former Envoy) that is listed as 405 Kilburn High Rd, but the current numbering stops around 390 of which I can find no trace, do you know where it was?

Exterior picture taken just after closure of the Broadway here:–

Slight confusion here.
The address of the Classic on Kilburn High Road probably was 405. It was right up the top of the High Road, on the western side, next to Kilburn tube station – just about on the corner of Christchurch Avenue. Externally it was an ugly, metallic, sky blue box that loomed up by the railway line. I should think it was demolished in the late 1980s. The site is now a very spacious petrol station and a Spar store. Can’t see how a petrol station can afford to rent that much space, even if it is close to the bottom of the M1.
The Broadway was an entirely different beast. That was right down the bottom, on the eastern side, by Kilburn High Road British Rail station, right by Springfield Lane. It closed around ten years back. The site is now the 4-star hotel that didn’t mention Kilburn High Road in its brochures and promotional bumf when it opened.