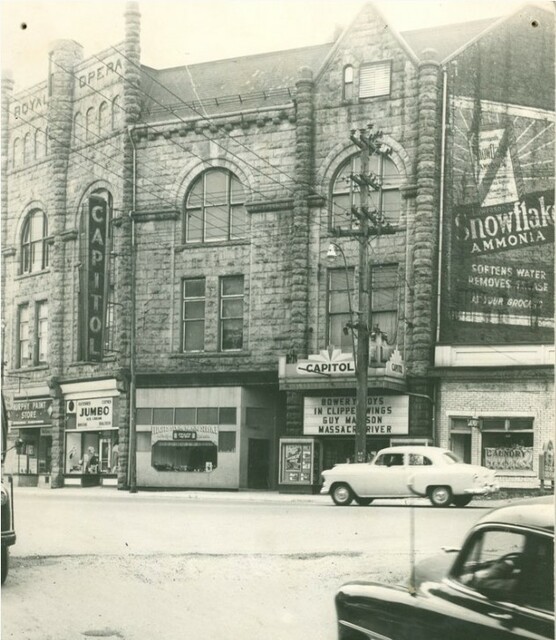 The 1894 Guelph Royal Opera House was located on the corner of Wyndham Street N. and Eramosa Road. It was converted to the Capitol Theatre in 1922 and closed in 1947.

In 1947, the Odeon Theatre was built and opened on the adjacent site.

The closing year currently given in the intro for this theater must be wrong. The April 10, 1954, issue of Boxoffice says this: “Bill Cupples has the distinction of being the last manager of the Capitol at Guelph, a former unit of 20th Century Theatres which has been torn down. the theatre had previously been operated by Famous Players for years.”

I’ve found Boxoffice references to a Palace Theatre at Guelph, opened by Famous Players in 1941; a Royal Theatre, operating from at least 1937 and until at least 1957; and a Regent Theatre, which was mentioned in 1941 and 1945, but apparently was opened about 1918 or 1919 for Paramount and taken over shortly after by Famous Players. There’s no indication of what became of it later, but it’s possible that Regent was an early aka for either the Capitol or the Royal, both of which were long operated by Famous Players.

A 1945 Boxoffice item made it clear that there were then only three theaters operating at Guelph, those being the Capitol, Royal, and Palace, all Famous Players houses.

According to this 2008 article from the Guelph Tribune, the Capitol actually opened in 1894 as the Guelph Opera House and became the Capitol in 1922. It includes two pictures of the Capitol, one after its conversion from the Guelph Opera House and the other nearer the time of its closing, which the article indicates happened in 1953. It also indicates that the location was at the corner of Wyndham and Eramosa (there does not appear to be a Woolworp in Guelph): http://www.guelphtribune.ca/printarticle/124386

There is a “Royal Opera House” listed under Guelph ON in the 1897-98 edition of the Julius Cahn Official Theatrical Guide. Unfortunately, there are no street addresses in this Guide. It had 1,500 seats and was managed by R.G. Hunt. The proscenium opening was 28 feet wide X 27.5 feet high, and the stage was 33 feet deep. The auditorium was on the ground floor. The 1897 population of Guelph was 12,000.

Based on this article, I do not think there can be any doubt that the Royal Opera House and the Guelph Opera House are the same. According to the article, the location was “at the top of Wyndham Street”: View link
The aka should be changed.

According to this online 2002 history of Guelph, (p. 30 of the 64 ) the Capitol was torn down soon after its closing and the Odeon (and a Simpson Sears) built in its place: View link
Status should be Closed/Demolished.

Address was 150 Woolwich St. It was right next door to the property that became the Odeon and is now the Guelph Concert Theatre.