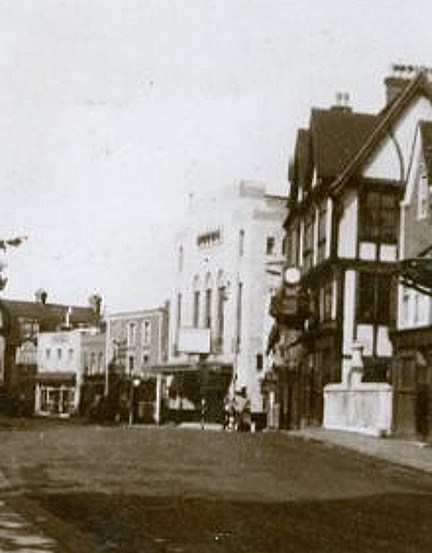 Originally planned and built by an independent operator, the building was taken over by Oscar Deutsch and was opened as one of his Odeon Theatres Ltd. chain of cinemas.

It opened on 3rd July 1933 with Jeannette MacDonald and Jack Buchanan in "Monte Carlo" plus Laurel & Hardy in "One Good Turn", with film star Jack Buchanan attending in person. Seating in the auditorium was provided for 990 in the stalls and 526 in the circle. The proscenium opening was 40feet wide, the stage was 10feet deep and there were 2 dressing rooms. Other facilities in the building were a cafe and a dancehall. In 1934 a Compton 3Manual/7Ranks organ was installed and it had an illuminated console on a lift.

The Odeon was closed on 15th July 1967 with Steve McQueen in "The Great Escape" and Cliff Robertson in "633 Squadron". The Compton organ was removed from the building and installed in Malvern.

It was converted into a Top Rank Bingo Club on 10th August 1967 and this lasted for twenty years. The bingo operation closed on 9th August 1987 and the building was demolished in 1989 as part of the re-development of the area. It was replaced by shops etc.

Three photos of the Odeon under demolition here:–