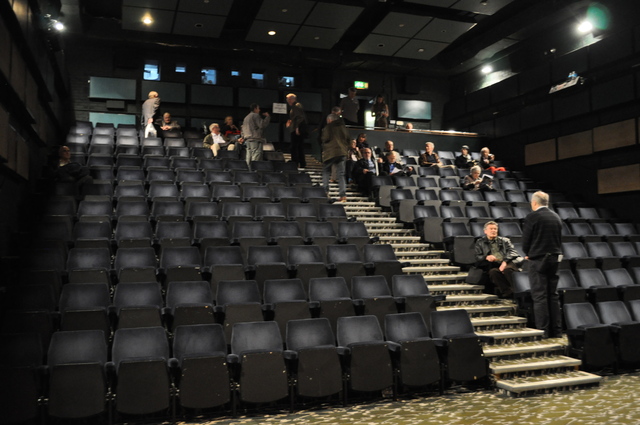 Located in the west London suburb of Hammersmith, beside the River Thames at Hammersmith Bridge. The building was originally built in the 1800’s as an industrial building. It was converted into a film studio in 1934. The Riverside Film Studios, used for many years to produce ‘B’ pictures, shorts and advertisements as well as main British feature films, including James Mason in “The Seventh Veil” in 1946. Modernisation was carried out in 1947 to the plans of architect Charles Edmund Wilford. The final feature film to be shot here was Alec Guinness in “Father Brown” in 1954. The studios were then taken over by the BBC officially opened by the Queen Mother on 29th March 1957. Programmes such as “The Quatermass II”, “Hancock’s Half-Hour”, “Dr. Who”, “Dixon of Dock Green” and “Z Cars” were all produced here. Other popular programmes were “Top of the Pops” and “The Old Grey Whistle Test”.

In a room that had been used by the BBC as a dubbing room, a new 200-seat cinema was created in 1986, designed by the architectural firm of Burrell, Foley & Fischer (headed by John Burrell). There was also a separate live theatre space, and a café open to the public, as well as three sound stages continuing to operate in the studios building.

The Riverside Studios Cinema opened on 2nd November 1987 by actress Vanessa Redgrave. The auditorium has a steeply sloped and stepped floor, offering excellent views of the screen. It has two single reel 35mm projectors, and a 16mm projector. A digital projector was installed in 2013 while retaining the two 35mm projectors.

The Riverside Studios Cinema closed on 2nd August 2014, with other parts of the studios, including the live theatre space closing at the end of September 2014. The building was demolished to build a new Riverside Studios complex which contain 2 live theatres with 500 & 200-seat and 2 cinemas with 208 & 48-seats which opened in January 2020 (it has its own page on Cinema Treasures)