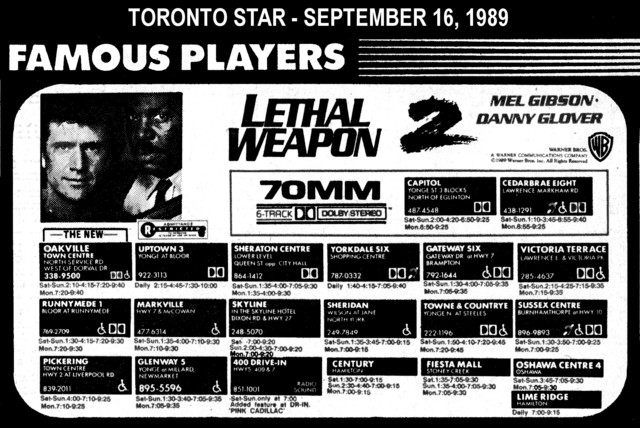 It opened July 22, 1954 with Susan Hayward in “White Witch Doctor”. Originally a single screen, it expanded to three screens in 1978. It closed in 1997 and was demolished in 1998 to make way for the Famous Players Colossus movie theater and IMAX, as well as fast food outlets.

I was born, in Toronto, in 1952. We first lived on Maple Leaf drive near Jane and Lawrence. Then moved, in 1959, to Sheppard and Jane.

I know my parents brought me to the 400 as a baby often. They didn’t have much money, and with me sleeping in the back they knew everything would be OK.

Later, my cousins and I would go there in by aunt’s car almost every Saturday night. I remember so clearly playing on the swings in front of the theatre.

My movie life, up until I was able to drive on my own, was split between the Odeon Weston (Lawrence and Weston Road) and the 400.

I recall when the other screens where added. My parents would take my sister and brothers to see the main feature. I would sometimes turn around to look at the other two screens in the hope I’d see something “naughty” (adult rated). Never happened though.

Nice marquee shot in the header.

These are the correct coordinates.

I’ve always wondered WHY they list it as Colossus Toronto. When it first opened it was listed as Colossus Woodbridge which is part of Vaughan, but definitely NOT Toronto.

The 400 Drive-in was originally owned and operated by Nat Taylor’s 20th Century Theatres chain which was located at 175 Bloor St. E. in Toronto. He owned theatres all over Ontario including the Towne Cinema, the Uptown and the Glendale Cinerama in Toronto.

July 22nd, 1954 grand opening ad in photo section along with its aerial.

The Dec. 4 issue of Boxoffice ran a two-page spread, with photos, about the 400, focusing on how spread out it was. “Extra spaciousness has been provided between the speaker posts and extra depth between each ramp, allowing easier turns.”