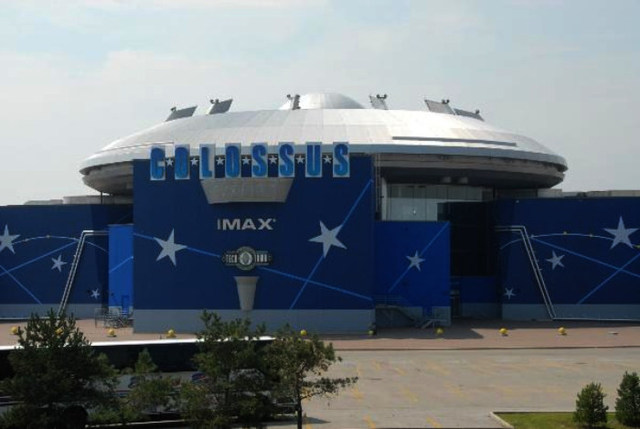 Famous Players Colossus opened February 12, 1999. It has 18 screens and one six story IMAX screen. It has a giant UFO on the roof with flashing lights that can be seen for miles. The second floor is a fully licensed lounge (The Pod) offering alcoholic beverages and cocktails.

The ATM machines are like green aliens greeting you as you enter the building. There are lots of Star Trek decorations hanging from the ceiling.

There are three Colossus theatres in Canada, the other two are located in Laval, Quebec and Langley, BC. They are Famous Players' most successful theatres and Colossus welcomed its one millionth guest in August of 1999 only six months after the opening.

It’s just that the cinemas themselves leave little to the imagination. Yeah, the lobby in this cinema is just as pretty as the Colossus and Scotiabank closer to me in Vancouver, but the auditoriums themselves are just black boxes with screens too close to the seats.

I also find it kind of crazy that this cinema sits across a highway from the AMC Interchange 30. 49 screens total!!!

This opened on February 12th, 1999 as Canada’s largest cinema. AMC took the lead 3 months later until they closed off screens in 2011 making the Colossus Canada’s largest again. I posted the grand opening ad here.

Once again to add Mr. Rivest, it’s now managed by Cineplex (successor to FP). This should be named Colossus Vaughan Cinemas and has since added a DBox theatre and an UltraAVX screen.

The Xscape Entertainment Centre was recently opened and now has every format available: RealD3D, IMAX, UltraAVX, and DBOX.

The outside of the theatre has changed quite a bit! Instead of the building saying “COLOSSUS”, it says “CINEPLEX” and “CINEPLEX CINEMAS” on the other side. This confused me because there are actually Cineplex theatres that are called “Cineplex Cinemas”. Don’t think the name is changing though.

Although its now called Cineplex Cinemas Vaughan, name should be changed to reflect it. Seems to me Cineplex is only gonna use the Cineplex, Galaxy, SilverCity and Scotiabank brandings.

Since the closing of the AMC 30, this theater has gone downhill. At least with the AMC so close by, Cineplex knew that customers who were dissatisfied with their service could easily go elsewhere. Now that they’re the only theater in the area, the level of service has dropped to a pathetic level.

I went with some family to a “Family Favourites” presentation of March of the Penguins last year. The movie started twenty minutes late with no explanation, and had to be re-started three times. Using my cellphone, I filmed the debacle, and was threatened by an usher, who had been alerted to my action by the projectionist, to delete the file from my phone.

I brought this to the attention of management, who offered to send me a pair of passes for the inconvenience…. I’m still waiting, almost a year later.

Is the second floor inside the ufo?

Colossus opened on February 12, 1999, with My Favorite Martian, Message in a Bottle, Life is Beautiful, Shakespeare in Love, She’s All That, Payback, Blast From the Past, Rushmore, Saving Private Ryan, Thin Red Line, The Prince of Egypt, The Red Violin, T-Rex: Back to the Cretaceous and Special Effects, the latter two were presented in IMAX. All cinemas were THX certified and have digital sound (mostly Dolby Digital).

In regards to sound, all of the Silvercity/Coliseum/Colossus etc were all Dolby Digital with a few scant DTS units installed on the larger auditoriums, but around 1998 most soundtracks had all digital soundtracks (Dolby SRD, DTS and SDDS) a lot of those DTS units were never really used.