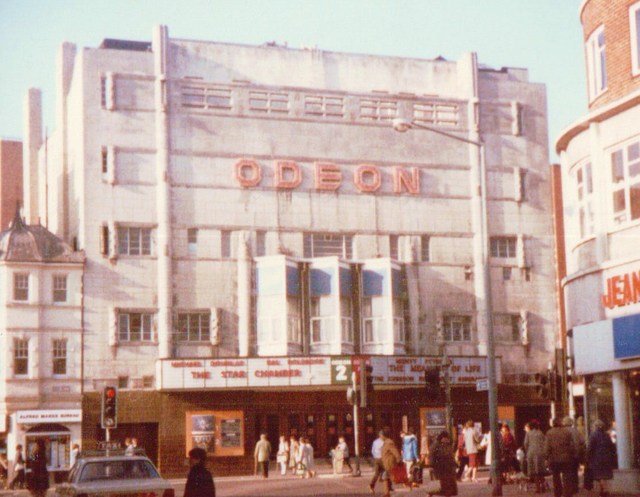 The now demolished Odeon Cinema was built on a site that was formerly half on a hotel; Scullards, and the other half was; the Alexandra (ex Philharmonic Hall 1865) and demolished in 1933 (it has its own page on Cinema Treasures). The new Regal Cinema opened on 22nd June 1934 with Gracie Fields in “Love, Life and Laughter”, with Gracie Fields appearing in person to open the cinema together with Captain Sir Arthur Rostron. Mounted police were called in to restore order to the massive crowds blocking Southampton’s high street;Above Bar. The Regal Cinema was a project of County Cinemas and in September 1939 they were taken over by Oscar Deutsch’s Odeon Theatres Ltd. It was equipped with ‘Wonder’ organ, a 12 unit Conacher with 4 manual and 13 ranks which was opened by Reginald Foort.

It was re-named Odeon from 15th April 1945. the first film choice to open the cinema under its new name was Danny Kaye’s "The Secret Life of Walter Mitty" which attracted 25,000 patrons in one week.

Having survived WW2’s bombing, except for shrapnel to the façade, the Odeon closed for a brief period in 1962 for modernisation. The Odeon was long and dull in appearance while the tall proscenium arch gave a dull appearance. All of that disappeared, including the Conacher pipe organ which had been opened by Reginald Foort. The 50,000 Pound modern remodeling produced a dark ceiling accented with thousands of tiny white lights and a bank of concealed floodlights trained on the monster new diamond shape-design style lift curtain. This rose to reveal a massive new curved screen with 70mm projection. The May 7th, 1962 gala re-opening featured "Sink The Bismark" with an Honour Guard of Royal Naval Sea Cadets.

With the march of time came another change inside the cinema. Audiences were not as large in the late 1970’s, so after a few weeks the former balcony gave way to 476 seats as Odeon 2 and the main floor auditorium was to be known as Odeon #1, housing 756 seats.

The Odeon’s once popular café finally closed to the disappointment of many movie goers and was turned into Odeon #3 seating 98.

Televised live boxing, on-stage concerts and the Southampton Film Festival all tried to booster the box office receipts but the Odeon’s fate was sealed on September 5th, 1993, with "Jurassic Park" as the final chapter in a long career of screening first run movies. It is not too clear as to what happened to the cinema cat "Ginger" who disappeared in 1961.

A cluster of retail shops now reside where the Odeon/Regal stood; one being a video store… probably selling films which were once screened on this very site.

Hey, Ken and Ian… thanks for the above photos; I’m quite homesick, but the “old lady” is gone for good. Shame!

Back in 1951, I had just returned to Southampton from a five month holiday with relatives in Long Island, New York.
Before my July departure, I saw “Ma & Pa Kettle Back on the Farm” at the (now gone) Corona Theatre in Elmhurst.
And guess what was playing on board the Queen Mary while crossing the Atlantic? Yes, “Ma & Pa”… And what opened at the Odeon just after I got home? How did you guess?
The funniest of scenes must have been while Ma & Pa were being chased by a train while operating a hand pumped trolly.
That DVD is now in my collection. Such happy memories!

Notes from “100 Years of Cinema in Southampton” by Patrick Hayward;
The Odeon’s (former Regal) much popular cafe, situated at balcony level, was sorely missed when it closed in the 1970’s.
Interestingly, it was the last cinema cafe to close in England!

Another view of the Odeon here:–

I remember my parents taking me to Southampton Odeon in the late 1950’s and during the interval my shock at this loud noise coming from underground……….To my surprise and for the first time ever I saw a huge illuminated Compton Organ rising from the front of the stage. I will never forget it. Later after joining Rank Theatres I remember having a free Dinner in the restaurant several months before it closed in 1972. Attaching an original advert which was used to advertise the Southampton Odeon Restaurant.